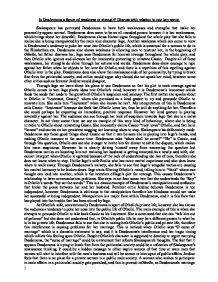 Is Desdemona a figure of weakness or strength? Discuss with relation to one key scene. Shakespeares' Othello.

Is Desdemona a figure of weakness or strength? Discuss with relation to one key scene. Shakespeare has portrayed Desdemona to have both weaknesses and strengths that make her personality appear normal. Desdemona does seem to be an all rounded person however it is her weaknesses, which brings about her downfall. Desdemona shows blatant signs throughout the whole play that she fails to realise she is being manipulated by the main vice character Iago. Another weakness which can come to view is Desdemona's tendency to poke her nose into Othello's public life, which is unnatural for a woman to do in the Elizabethan era. Desdemona also shows weakness in allowing men to mistreat her; in the beginning of Othello, her father disowns her, Iago uses Desdemona for his own revenge throughout the whole play, and then Othello who ignores and silences her for innocently protesting to reinstate Cassio. Despite all of these weaknesses, her strengths do shine through her actions and words. Desdemona does show courage to repel against her father when he objects to her love for Othello, and there is a repetition of this repelling against Othello later in the play. Desdemona does also show the renaissance side of her personality, by trying to break free from the patriarchal society, and critics would argue why should she not speak her mind, however some other critics such as feminist Jardine would disagree. ...read more.

This is an example of a weakness; she does not think her action through. Another weakness Desdemona faces is the mistreatment of men. This is one aspect of her which has been repeated throughout the play, and which could to an extent mirror the insufficiency of her intelligence. In act one, Desdemona's father, Brabantio could not accept the truth that his "jewel" eloped with the Moor. Once he was proven wrong, he rejected his "jewel." Shakespeare compares Desdemona to a jewel because jewels are considered precious, and precious is what Desdemona was to Brabantio, so to reject her is a harsh move. However Desdemona marrying against her father's will is contradicting the innocent comments he made about his daughter, also Desdemona's actions are seen to be disobedient and it is something that is not common in a patriarchal society. Desdemona does defend herself and tries to justify her actions, but the audience is given the insight that she acted on impulse, and perhaps she did not think her actions through thoroughly resulting in her rejection. Desdemona fails to see Iago is using her, and it is through him her troubles thicken. She is playing into Iago's plot to make Othello's "jealousy so strong/That judgement cannot cure." ...read more.

Desdemona does not accept female degrading comments. You could decide to look at Desdemona's situation from a Structuralist perspective. Society is following patriarchal norms and values, however Desdemona could be seen as a renaissance character, thus it is society, which conforms her to resists against the Elizabethan society by speaking her mind and becoming an independent wife. The independence again mirrors Jardine's thoughts on Desdemona. As a feminist she believes Desdemona is too independent for an Elizabethan wife, how from a modern day opinion, a woman's independence is seen to be a great strength and quality which is highly valued. By weighing up Desdemona's weaknesses and strengths, it appears she is a figure of weakness. However the majority of her weaknesses appears because of surrounding characters, which funnily enough happen to be the men in her life. She allows men to mistreat her without her even consciously realising it, and it is Iago who cunningly manipulates her. But on the other side of the coin it can be said that she has been put in the situations, and it is for the audience to assess and witness her reactions. Desdemona's strengths are not right for the patriarchal society; her strengths are better off in a modern day society, which is why some would argue Desdemona is a figure of renaissance thinking. 1 ...read more.