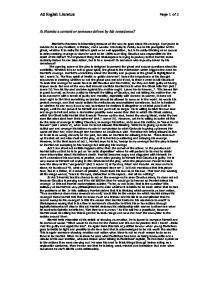 Is Hamlet a coward or someone driven by his conscience?

Is Hamlet a coward or someone driven by his conscience? Hamlet's character is interesting because of the way he goes about his revenge. Compared to Laertes he is very hesitant, a thinker, not a warrior. His delay is mainly due to his perception of the ghost, whether it is really his father's spirit or an evil apparition, but is he really thinking of an excuse to delay seeking revenge or does he want to be 100% sure King Claudius was responsible for the death of his father? The important thing that Shakespeare is trying to portray is that Hamlet seeks certainty before he can take action, but is he a coward? Or someone who is purely driven by his conscience? The opening scene of the play is designed to present the ghost and arouse questions about its credibility. Whether it is an evil or good spirit, the ghost is the mechanism which triggers the need for Hamlet's revenge. Hamlet's uncertainty about the identity and purpose of the ghost is highlighted in Act I scene IV, "Be thou spirit of health or goblin dammed", hence the importance of his thought sequences in deciding whether or not the ghost was real and if not, is there a need to kill Claudius? ...read more.

Is it not monstrous that this player here, But in a fiction, in a dream of passion, Could force his soul so to his own; That from her working all his visage waned, Tears in his eyes, distraction in his aspect....And all for nothing" In Act 3 Hamlet has the chance to act on his revenge as he sees Claudius alone, he does not act because Claudius is praying and if he did kill him then he would go to heaven so Hamlet delays his revenge. In this act Hamlet contemplates suicide, 'To be, or not to be, that is the question' this soliloquy of Hamlet's is very philosophical as he asks whether it is better to be dead rather that to face the problems of life. In this soliloquy Hamlet claims that it is thinking which prevents us from action, 'Thus conscience does make cowards of us all,' could this be the reason for which Hamlet delays his revenge? Does Hamlet feel that he is too much of a thinker and his life is so complicated that he cannot sweep to his revenge? Is this the reason that Hamlet holds for his reluctance to react? Is Shakespeare saying that it is a flaw in someone's character to think his or her actions through logically beforehand? ...read more.

for having s****l relations with their mothers which the young boys also desire, and so they view their fathers as rivals that they would rather have out of the way. These thoughts are repressed as a form of defence for fear that their fathers will realise what they are thinking. Concluding, is Hamlet really a coward? Does he not believe the ghost? Or did he not wish to strike Claudius whilst he was praying? In my opinion I believe Hamlet is a very thorough thinker, He tries to carry out the task, but he is held back in some way, because he cannot kill a person who he recognises as so like himself in what he wants to be like and wishes he could do. His desires towards his mother have been so long repressed that they are now repulsive to him, but yet her remarrying brings those thoughts to his attention. He sees someone taking the place of his father in her affections, the place that he has long coveted. When Hamlet discovers the identity of his father's murderer his first instant reply is "O my prophetic soul! My uncle?" (Act I scene V). This does imply that unconsciously the idea had been in his mind and had suddenly been brought back to his awareness. Page 1 of 2 AS English Literature ...read more.

This essay demonstrates some strong analysis but the question is never fully addressed within the response. There needs to be a more obvious structure to the response where language, form and structure are analysed in relation to the question.