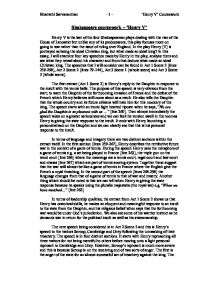 Shakespeare coursework - 'Henry V' Henry V is the last of the four Shakespearean plays dealing with the rise of the House of Lancaster but unlike any of its predecessors, this play focuses more on going to war rather than the issue of ruling over England. In the play Henry [V] is portrayed as being the ideal Christian king, but what made an ideal king? In this essay, I will examine four key speeches made by Henry in the play, analyse them and see what they reveal about his character and from that deduce what made an ideal Christian king. The speeches that I will consider can be found in Act 1 Scene 2 [lines 259-298], Act 2 Scene 2 [lines 79-144], Act 3 Scene 1 [whole scene] and Act 3 Scene 3 [whole scene]. The first extract [Act 1 Scene 2] is Henry's reply to the Dauphin in response to the insult with the tennis b***s. The purpose of this speech is very obvious from the start; to warn the Dauphin of the forthcoming invasion of France and the defeat of the French which Henry believes will come about as a result. He also tells the Dauphin that the whole country and its future citizens will hate him for this mockery of the king. The speech starts with an ironic light hearted riposte when he says, "We are glad the Dauphin is so pleasant with us..." ...read more.

Bottom of my soul [line 95], coined me into gold [line 97] and extract one spark of evil [line 101]. These references suggest that the traitors are like some strange magical force from which evil and malevolence ooze out and seek to destroy God's chosen representative on Earth. When he moves on in his speech to question the motives of the traitors the imagery changes to the traitors becoming devils lured into performing malicious and treacherous acts by their temptation and greed. Parallels are also drawn to the fall of man in the Garden of Eden [lines 121-137]. In this speech we once again see Henry's excellent oratorical skills and his ability to maintain his eloquence and dignity despite the seriousness of the attempted act of treachery as well as the importance of loyalty to him. We also know from this speech that he is a religious believer as he makes biblical references to the Garden of Eden and Adam and that he is not spiteful as the traitors are only executed because they are such a large threat to state security. However, for the first time in the play we see the shrewd aspect of Henry as he tricks the traitors into signing their own death warrants. The third speech appears in Act 3 Scene 1 [whole scene] and concerns itself with Henry's attempt to rouse his troops prior to the siege of Harfleur. ...read more.

The final speech that I am going to consider is Act 3 Scene 3 [whole scene]. In this scene Henry verbally intimidates the Governor of Harfleur into submission and forces him to surrender Harfleur to the English. Unlike the other speeches that are being considered, this scene [being only 68 lines in length] doesn't really have much in the way of progression and only really has one theme. In this scene, Harry sends a threat to the governor of Harfleur telling to surrender or face the consequences of his army's actions which would be uncontrollable if they were ordered to attack again. When the governor finally submits Henry tells Exeter to fortify the town but to show mercy to the townspeople. The imagery that is conjured up by Henry is very powerful. The way in which he talks about the total destruction of Harfleur is such that we can picture it burnt and razed to the ground with the woman being repeatedly raped and the children being tortured and beaten. We can imagine the bloodied decapitated heads of the Harfleur soldiers pierced on tall spikes left standing outside the city's boundaries and the howls of the mothers over the bodies of their dead/dying children. Henry has also reverted from using the English he uses when addressing his common troops to the more dignified, eloquent and diplomatic language he uses when speaking to the nobility. ...read more.