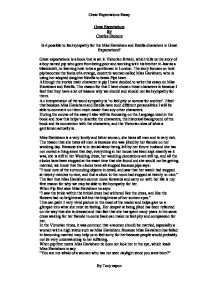 Is it possible to feel sympathy for the Miss Havisham and Estella characters in Great Expectations?

Great Expectations By Charles Dickens Is it possible to feel sympathy for the Miss Havisham and Estella characters in Great Expectations? Great expectations is a book that is set in Victorian Britain, which tells us the story of a boy named pip who goes from being poor and working with his brother in-law as a blacksmith, to learning how to be a gentleman in London. The story focuses on how pip becomes the focus of a strange, eccentric woman called Miss Havisham, who is using her adopted daughter Estella to break Pips heart. Although the stories main character is pip I have decided to write this essay on Miss Havisham and Estella. The reason for that I have chosen these characters is because I feel that they have a lot of reasons why we should and should not feel sympathy for them. An interpretation of the word sympathy is 'to feel pity or sorrow for another'. I feel that because Miss Havisham and Estella have such different personalities I will be able to comment on them much easier than any other characters. During the course of the essay I also will be focussing on the Language used in the book and how this helps to describe the characters, the historical background of the book and its connection with the characters, and the Victorian idea of what a gentlemen actually is. Miss Havisham is a very lonely and bitter women, she hates all men and is very rich. ...read more.

Secondly I feel that it may not be possible to feel sorry for Miss Havisham because of the way in which she is using Estella as a tool to break men's hearts in her evil game to punish men. By using Estella in this way she is not only hurting innocent men, but she is also preventing Estella from ever finding true love or experiencing any life of her own. Apart from the fact that Miss Havisham is being very selfish to Estella she is also helping to waste Estella chance in life to use her education, which although may not seem much to people of this generation, for a women in those days to be educated would be extremely rare. Another reason for us not to feel sorry for Miss Havisham Is because of the way in which she is stereotyping all men. Miss Havisham feels hatred to all men which apart from the fact that this is preventing her chances of ever finding love again, it is also not being fair to decent men out their who may deserve the benefit of the doubt. Pip is an average boy who has not done anything to offend anybody, but when he is dragged out of a world that he is used to and is familiar with to be shown deliberately by Miss Havisham a world that he can never have 'the life of a gentleman' causes pip to feel that he is common and worthless. ...read more.

she constantly asks him what he thinks of her, and tries to make Pip cry whenever she can, she also hits Pip across the face a couple of times, in order to make Pip confused about his feelings for her. Lastly, Estella not only tells Pip that he is common, but she also treats him as though he is common. When pip visits Miss Havisham he is fed, this is one of the occasions when Pip makes reference to how Estella treats him, Pip says: "Once again I am fed scraps as though I am a dog, Estella does not look at me whilst serving, just like you would a dog." This is inexcusable behaviour from Estella so when Pip makes a comment on how he is fed it is very hard indeed to feel any sympathy for her. In conclusion, I feel that Estella is a very confused character. She is unaware of what she really wants, at the beginning of the book she treats Pip as though he is nothings but as the story comes to a close Estella becomes more and more emotionally attached to Pip, which then ends up in them walking together at the end of the book. Although at times throughout the book it is extremely hard to feel any kind of sympathy for Estella, if you weigh up her bad points against what she has had to deal with and live with throughout her life it is pretty evenly matched. Great Expectations Essay By Tony capon ...read more.