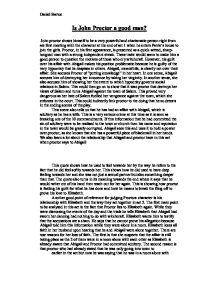 Is John Proctor a good man?

Is John Proctor a good man? John proctor shows himself to be a very powerful and charismatic person right from are first meeting with the character at the end of act 1 when he enters Parris's house to join the girls. Proctor, in his first appearance, is presented as a quick-witted, sharp-tongued man with a strong independent streak. These traits would seem to make him a good person to question the motives of those who cry witchcraft. However, his guilt over his affair with Abigail makes his position problematic because he is guilty of the very hypocrisy that he despises in others. Abigail, meanwhile, is clearly not over their affair. She accuses Proctor of "putting knowledge" in her heart. In one sense, Abigail accuses him of destroying her innocence by taking her virginity. In another sense, she also accuses him of showing her the extent to which hypocrisy governs social relations in Salem. This could then go on to show that it was proctor that destroys her views of Salem and turns Abigail against the town of Salem. This proved very dangerous as her hate of Salem fuelled her vengeance against the town, which she enforces in the court. This could indirectly link proctor to the doing that he so detests in the ending scenes of the play. This scene also tells us that he has had an affair with Abigail, which is adultery as he has a wife. ...read more.

But underneath this meaning is the fact that Proctor is losing his wife and lover, it is pure love that is enraging his list for vengeance on the court and his wanting for justice for his wife. We see the desperation of a man who is losing the one true person he loves. This is a huge opposite to the proctor that we see in the beginning of the act who seems to treat Elizabeth simply as a family organiser and shows little love to her what so ever. This is proctor realizing his love for her and we see the progression in his character from loveless husband to passionate lover. In act 3 we see proctor attempt to get his wife back in a more legal way then attacking the Marshall as we see him take on the court and try to undermine Abigail's newfound authority. He uses marry warren as a witness to the girls lies of being able to see the devil and how they only used this to manipulate the court to do what they wanted. Proctor is then successful in his attack and is allowed to have his wife back as she is with child she is allowed another year to live with out prosecuting as the child will need to be born. This means that proctor has now achieved what he set out to do as he has got his wife back for a year at least, he could leave now and live happily with his wife back but instead he chooses to continue his action to prove the court as wrong and injust. ...read more.

"I have given you my soul; leave me my name!" he rages; this defence of his name enables him to muster the courage to die, heroically, with his goodness intact. Proctor's refusal to take part in the ritual transfer of guilt that has dominated the play-the naming of other "witches"-separates him from the rest of the accused. His unwillingness to sign his name to the confession results in part from his desire not to dishonour his fellow prisoners' decisions to stand firm. More important, however, Proctor fixates on his name and on how it will be destroyed if he signs the confession. Proctor's desire to preserve his good name earlier keeps him from testifying against Abigail, leading to disastrous consequences. Now, however, he has finally come to a true understanding of what a good reputation means, and his defence of his name, in the form of not signing the confession, enables him to muster the courage to die heroically. His goodness and honesty, lost during his affair with Abigail, are recovered. In conclusion I think that john proctor is a good man as the evidence for him being a bad an evil man is made to look miniscule compared to the good he has done, especially towards the closing of the play. I think the heroics and courage that he shows and the fearless way he protects his view of justice and stands up for what he believes in shows what and honest and good man john proctor really is. Daniel Barton ...read more.

This is a generally well written essay with a large coverage of points made and a good depth of knowledge of the play is demonstrated. There needs to be more direct reference to the text with more points and interpretations being supported with specific quotes.