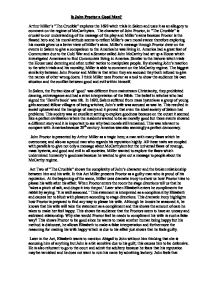 Is John Proctor a Good Man in Arthur Miller's Crucible?

Is John Proctor a Good Man? Arthur Miller's "The Crucible" explores the 1692 witch trials in Salem and uses it as an allegory to comment on the regime of McCarthyism. The character of John Proctor, in "The Crucible" is crucial to our understanding of the message of the play and Miller's aims because Proctor is the flawed hero and his moral attitude seems to reflect Miller's own moral stance therefore exploring his morals gives us a better view of Miller's aims. Miller's message through Proctor drew on the events in Salem to give a comparison to the America he was living in. America had a great fear of Communism due to the Cold War and a Senator called John McCarthy had set up a House which investigated Americans to find Communists living in America. Similar to the historic witch trials the House used damning and often unfair tactics to manipulate people. By showing John's reaction to the witch trials and his morality, Miller is able to comment on the McCarthy regime. The biggest similarity between John Proctor and Miller is that when they are accused they both refused to give the names of other wrong doers. I think Miller uses Proctor as a tool to show the audience his own situation and the conflict between good and evil within himself. In Salem, the Puritan idea of 'good' was different from mainstream Christianity, they prohibited dancing, extravagance and had a strict interpretation of the Bible. ...read more.

Proctor is shown as a tragic hero when although he has told the truth and tried to do good he is accused and imprisoned. Miller shows Proctor to be a good man in this part of the play because although Proctor is decided by the court to be a warlock at the end of the act, ironically it is the judges, who manipulate the proceedings and thus kill innocent lives, who are the real wrongdoers. This is shown by the contrast between Proctor's dialogue and Hathorne's: the audience hears Hathorne's voice accusing a woman: 'Why do you hurt these children?' This accusation manipulates since it already assumes guilt. The technique is effective because hearing only Hathorne's voice causes it to sound more threatening. Hathorne does not seek to find out the truth but force people to confess to witchcraft. Proctor's polite language like 'sir' and the honesty in his words contrasts with Hathorne's lack of respect for the accused. Also when Proctor asks Mary to testify he does not manipulate her but calms her down: 'Remember what the angel said to the boy' he says to allow her to speak freely. The reason that Miller showed the flaws of Proctor in Act II was to lead us to this part because Miller is telling the audience of the play that although Proctor is not perfect he still has good morals and the religious theocrats of the court who would seem blemish-free in reputation, are the real villains. ...read more.

His flaws were used by Miller to give his message to American society: people in their time who were being prosecuted by John McCarthy may have flaws just like Proctor but really the true evil lay within the House itself and that the people were innocent and just victims to jealousy and the injustice of hysteria just like Proctor was in Salem. The main technique of irony: the judges and accusers seemed like moral superiors yet the judges were manipulative and the accuser' vengeful whereas Proctor who was flawed and thus seemed sinful did not succumb to either evils. This helps strengthen Miller's message about the people who accused others of Communism and the House itself. The universal purpose is to remind people that jealousy and hysteria are dangerous things and that even ideal societies like the democracy of America and the theocracy of Salem can be unjust and uncivilised and this is shown brilliantly by the harsh and cruel manipulative manner of the judges. In Salem's idea of goodness Proctor was a good man at the end of the play because he was sorry for his sins and believed in God; he even demonstrated this by refusing to lie at the end. Like all humans he had flaws but he overcame these by doing the right thing at the end. In Miller's and modern times, he is also a good man because we respect people who stand up for what they believe in like Proctor did in the courts and also we value truth he stood for in an ever increasing world of media lies and propaganda. ...read more.