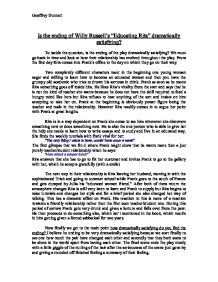 Is the ending of Willy Russell's "Educating Rita" dramatically satisfying? To tackle the question, is the ending of the play dramatically satisfying? We must go back in time and look at how their relationship has evolved throughout the play. From the first day Rita comes into Frank's office to the day on which they go on their way. Two completely different characters meet in the beginning one young woman eager and willing to learn how to become an educated woman and then you have the grumpy old academic who tries to drown his sorrows in drink. Frank as soon as he meets Rita something goes off inside him. He likes Rita's vitality from the start and says that he is not the kind of teacher she wants because he does not have the ...read more.

He is also the one person who is able to give her the help she needs to learn how to write essays and to study and live in an educated way. She finds the weekly tutorials with frank vital for her: "The only thing I value is here, comin' here once a week" The first glimpse that we fin d where Frank might show that he wants more then a just purely teacher/student relationship when he says: "How about a proper lunch" Rita answers that she has to go to fix her customer and invites Frank to go to the gallery with her, which he accepts gratefully (with a smile) The next step in their relationship is Rita leaving her husband, moving in with the sophisticated Trish and going to summer school while Frank goes to the south of France and gets dumped by Julia his "educated women friend." ...read more.

During this period of sorrow Frank gets very drunk and gives a lecture and falls over from the pew. He then proceeds to do something else, which isn't mentioned in the book, which results in him getting given a forced sabbatical for two years. Now finally we get to the main point how dramatically satisfying do you find the ending? I believe he ending to be very dramatically satisfying because we start finally to see one how much the pair have changed each other and secondly that they both seem to be alone in the world apart from having each other. The final scene ends the play nicely with a little giggle of the cutting of the hair after the seriousness of the scene just gone by and giving a rounded off finished feeling a summary of their feeling. Geoffrey Dunnett ...read more.