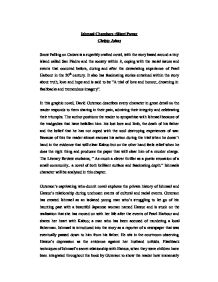 Ishmael Chambers :Silent Power Christy Johns Snow Falling on Cedars is a superbly crafted novel, with the story based around a tiny island called San Piedro and the society within it, coping with the racial issues and events that occurred before, during and after the devastating experience of Pearl Harbour in the 20th century. It also has fascinating stories entwined within the story about truth, love and hope and is said to be "A trial of love and honour, drowning in flashbacks and tremendous imagery". In this graphic novel, David Guterson describes every character in great detail so the reader responds to them sharing in their pain, admiring their integrity and celebrating their triumphs. The author positions the reader to sympathise with Ishmael because of the tradgedies that have befallen him- his lost love and limb, the death of his father and the belief that he has not coped with the soul destroying experiences of war. Because of this the reader almost excuses his action during the trial when he doesn't hand in the evidence that will clear Kabuo but on the other hand feels relief when he does the right thing and produces the paper that will clear him of a murder charge. ...read more.

Guterson has included this scene to show the deportment taught by Hatsue's culture and to show the contrast between their child and adult life. Motivated by the desire and strong love for Hatsue he hands the evidence in, and is rewarded with the embrace of Hatsue, symbolising he can move on with his life. The reader is exposed to Ishmael as he was as a child, through a series of flashbacks, but it also seems asthough Ishmael is still in his child state as he isn't described as strong and masculine, but rather frail and helpless. Guterson writes so that you wouldn't think of Ishmael as pathetic and immature, his words just show how deep his love was. Ishmael is portrayed as a very positive character to the reader at the beginning of the book, as the flashbacks of his happy caring attitude as a child are replayed, symbolised by the hot sun and wonderful atmosphere Guterson creates. After experiencing Pearl Harbour and having to kill people who looked like Hatsue, Ishmael is transformed into a man of revulsion and negativeness. At this time the island is covered in snow, along with its secrets and any confidence Ishmael had. ...read more.

After Pearl Harbour Ishmael inherited his fathers newspaper business, therefore giving him the power of controlling what the people of San Peidro were exposed to and read in the newspaper, perhaps influencing many peoples opinions on the events Ishmael wrote about. The newspaper gave Ishmael a chance to voice his opinions to the island, which places him in a highly respected position on the island. Characters within the book recognise Ishmael as a man with a good heart and they are aware of his experiences during the war. By Guterson including the chapter on Ishmaels experience shows how virtually impossible it was to live through the war without changing significantly and serves as an explanation for Ishmaels coldness, "his numbness was a terrible thing, he didn't feel anything except that he looked forward to killing as many Japs as possible" (P.208) The chapter is also a representation of how strong Ishmael was, he was without Hatsue, without friends or family and saw people murdered around him and he still survived, and if he hadn't then Kabuo Miyamoto may have been thrown in jail. Ishmael held extreme power by holding the key to Kabuo's trial. He not only held the key to Kabuo's life, but also the key to Hatsue's happiness along with Hatsue's children's future. ...read more.