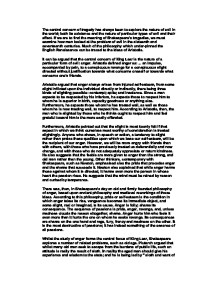 It can be argued that the central concern of King Lear is the nature of a particular form of evil: anger. Aristotle defined anger as: ... an impulse

The central concern of tragedy has always been to explore the nature of evil in the world; both its existence and the nature of particular types of evil and their effect. If we are to find the meaning of Shakespeare's tragedies, we must examine how men looked at the problem of evil in the sixteenth and seventeenth centuries. Much of the philosophy which under-pinned the English Renaissance can be traced to the ideas of Aristotle. It can be argued that the central concern of King Lear is the nature of a particular form of evil: anger. Aristotle defined anger as: ... an impulse, accompanied by pain, to a conspicuous revenge for a conspicuous slight directed without justification towards what concerns oneself or towards what concerns one's friends. Aristotle argued that anger always arises from injured self-esteem, from some slight inflicted upon the individual directly or indirectly, there being three kinds of slighting possible: contempt; spite; and insolence. Since a man expects to be respected by his inferiors, he expects those to respect him to whom he is superior in birth, capacity goodness or anything else. Furthermore, he expects those whom he has treated well, as well as those whom he is now treating well, to respect him. According to Aristotle, then, the man who is slighted by those who he thinks ought to respect him and feel grateful toward him is the more easily offended. ...read more.

Lear distributes Cordelia's dower to his two flattering daughters, and gives away the burdens of state, he retains The name, and all the addition to a king, and thus we see that pride will still be panoplied with the trappings of a king. His pride and self-esteem are so mingled with anger and his desire for revenge, in this speech, that they become one. It is Kent who, once again, tries to check Lear's rashness by a combination of righteous anger and pleading for the love of Cordelia. Even Lear's threat to his life does not prevent him from trying to protect Lear from himself. Even as Lear lays his hand upon his sword, Kent exclaims again: Kill thy physician, and thy fee bestow Upon the foul disease. Revoke thy gift; Or, whilst I can vent clamour from my throat I'll tell thee thou dost evil. And now, just as he did to Cordelia, he turns in pride and outrageous anger to revenge himself on his most loyal friend, who, like Cordelia, has refused to play the part of flatterer but has instead insisted upon trying to save him from evil and folly by telling him the truth. That Lear's anger has led him to a course that is both evil and foolish is at once evident in the discussion between Goneril and Regan that follows the departure of Cordelia. ...read more.

Lear continually recounts the good he has done and the gratitude that is owed to him, while Goneril and Regan forget altogether the benefits they have received and fail to be grateful for them. Whilst both the givers and receivers are guilty, it is Lear himself who must bear the greater responsibility; there can be no doubt that he gave, not that which he prized for himself, but that for which he had no further use. Gratitude was not, therefore, due to him for his good turn. However, this does not excuse the behaviour of Goneril and Regan: whilst Lear should not expect gratitude, their behaviour is indeed shameful because they show no gratitude whatsoever to Lear for giving them what they so eagerly desired. Since it is ingratitude that particularly injures our self-esteem, the result is the rousing of violent anger in the one who feels that his own good deeds have not been appreciated. His exiling of Cordelia was in response to her perceived slighting of him; now at Goneril's first suggestion that he restrain his followers a little, he feels contempt thrown upon his own goodness: Ingratitude, thou marble-headed fiend, More hideous when thou show'st thee in a child Than the sea-monster. and, the depth of his hurt and his anger is more than evident in his cursing of Goneril: ...that she may feel How sharper than a serpent's tooth it is To have a thankless child! ...read more.