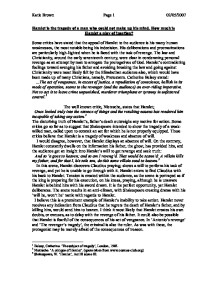 It could be said that Hamlet is not a play of inaction, but a play of providence and fate. Shakespeare seems to purposefully initiate action through inaction to show how certain events act as a catalyst for the eventful finale

Hamlet is the tragedy of a man who could not make up his mind. How much is Hamlet a play of inaction? Some critics have stated that the appeal of Hamlet to the audience is his many human weaknesses, the most notable being his indecision. His deliberations and procrastinations are particularly high-lighted when he is faced with the task of revenge. The law and Christianity, around the early seventeenth century, were clear in condemning personal revenge as an attempt by man to arrogate the prerogatives of God. Hamlet's contradicting feelings toward avenging his father and avoiding breaking the law and going against Christianity were most likely felt by the Elizabethan audience also, which would have been made up of many Christians, namely, Protestants. Catherine Belsey stated: ...The act of vengeance, in excess of justice, a repudiation of conscience, hellish in its mode of operation, seems to the revenger (and the audience) an over-riding imperative. Not to act is to leave crime unpunished, murderer triumphant or tyranny in unfettered control.1 The well known critic, Nietzsche, states that Hamlet; Once looked truly into the essence of things and the resulting nausea has rendered him incapable of taking any action.2 The disturbing truth of Hamlet's, father's death outweighs any motive for action. ...read more.

Cicero in De Oratore stated: Wordplay tactlessly handled belonged to buffoons or pedantic scholars.7 Coleridge characterises Hamlet as a man unable to act through excessive thought. Bradley disagrees with Coleridge, and states that: The inaction is only a feature of Hamlet's character issuing out of the peculiar circumstances of the action of this play.8 It could be argued that Hamlet intends to mislead, and his ambiguous sayings are not down to Hamlet's indecision, or even sardonic humour, but a tactic to wrong foot others. There are many instances within the play when Hamlet does display an ability to make instantaneous decisions and immediate action. The irony in this, however, is that the times when Hamlet does not deliberate, act as a series of catalysts that lead to his demise. When Hamlet first encounters the ghost, he makes no hesitation in following it, even when Horatio and Marcellus warn Hamlet not to follow. Why, what should be the fear? I do not set my life at a pin's fee, And for my soul, what can it do to that.9 Hamlet states here that the ghost can not harm him physically, as he deems his life worthless anyway, and cannot harm his soul. ...read more.