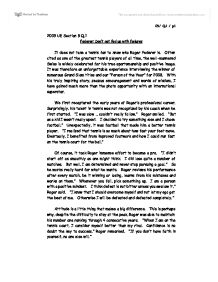 It does not take a tennis fan to know who Roger Federer is. Often cited as one of the greatest tennis players of all time, the well-mannered Swiss is widely celebrated for his true sportsmanship and positive image.

2009 UE Section B Q.1 Federer: Don't get fed up with failures It does not take a tennis fan to know who Roger Federer is. Often cited as one of the greatest tennis players of all time, the well-mannered Swiss is widely celebrated for his true sportsmanship and positive image. It was therefore an unforgettable experience interviewing the winner of numerous Grand Slam titles and our "Person of the Year" for 2008. With his truly inspiring story, zealous encouragement and words of wisdom, I have gained much more than the photo opportunity with an international superstar. We first recaptured the early years of Roger's professional career. Surprisingly, his talent in tennis was not recognized by his coach when he first started. ...read more.

I did lose quite a number of matches. But well, I am determined and never stop pursuing a goal." So he works really hard for what he wants. Roger reviews his performance after every match, be it winning or losing, learns from his mistakes and works on them." Whenever you fail, pick something up. I am a person with a positive mindset. I think defeat is not bitter unless you swallow it," Roger said. "I know that I should overcome myself and not let my ego get the best of me. Otherwise I will be defeated and defeated completely." Attitude is a little thing that makes a big difference. This is perhaps why, despite the difficulty to stay at the peak, Roger was able to maintain his number one ranking through 4 consecutive years. ...read more.

Instead, they are very good friends off-court and Roger admitted that Nadal is an extraordinarily gifted player. "When someone is better than you are, admit it and learn from them." Now he is really showing us how to pick something up when he falls. His defeat in the epic Wimbledon final did not bash Roger to death. "I pulled myself together and got back to my preparation for the upcoming matches. Ups and downs are inevitable in life. The important thing is not to give up, or you will never succeed," Roger said, concluding our interview. Roger is such a humble gentleman, so comfortable to speak with. He did not think of himself as a role model to youngsters but, to me and my fellow schoolmates, his pursuit of excellence, positive attitude and perseverance made Roger a genuine hero and our "Person of the Year". ?? ?? ?? ?? 09/ Q.1 / p.1 ...read more.

****
This is a very good GCSE article. It is clearly and logically structured with each paragraph planned for maximum impact.
Excellent use and discussion of quotes.
Very good use of tripling.
Shows a wide range of vocabulary.