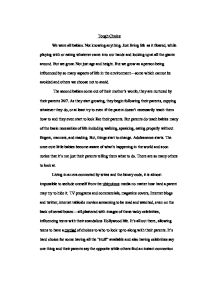 It is obvious that celebrity influence have started to take over parental influences among teenagers today. Therefore, celebrities should be aware that their actions have more of an effect on teenagers then many people believe

Tough Choice We were all babies. Not knowing anything. Just living life as it flowed, while playing with or eating whatever came into our hands and looking up at all the giants around. But we grow. Not just age and height. But we grow as a person being influenced by so many aspects of life in the environment-some which cannot be avoided and others we choose not to avoid. The second babies come out of their mother's womb, they are nurtured by their parents 24/7. As they start growing, they begin following their parents, copying whatever they do, or at least try to even if the parent doesn't necessarily teach them how to and they even start to look like their parents. But parents do teach babies many of the basic necessities of life including walking, speaking, eating properly without fingers, manners, and reading. But, things start to change. Adolescence starts. The once cute little babies become aware of what's happening in the world and soon notice that it's not just their parents telling them what to do. There are so many others to look at. Living in an era connected by wires and the binary code, it is almost impossible to seclude oneself from the ubiquitous media no matter how hard a parent may try to hide it. ...read more.

Teenage fashion is often influenced by celebrities and not their parents. Who would want to dress like their middle-ages parents at school and be laughed at? Plus, parents of emo kids probably do not dress anything like their children with black clothing, dyed-black straight hair, and thick eyeliner on. Although fashion can be though of as individuality, physical structure of teenagers, especially girls, seem to be a concern these days. Starting with Twiggy in the 1960s, celebrities have been creating impossible standards of beauty, more and more young adults are feeling "less confident, more angry, and more dissatisfied" with their looks and it is unnatural for 53% of girls were unhappy with their image and have tried to loose weight (National Institute on Media and the Family). Now, this cannot all be blamed on the media, but with celebrities becoming thinner and thinner, much self-confidence is lost and images of television stars or models have been connected to body displeasure. No matter how much a parent serves their children with healthy meals, if the child doesn't east, they cannot help out. Stars need to be concerned about their image because of the unpleasant fact that it causes young fans to strive to be unhealthily thin. The National Institute of Mental Health estimates that eating disorders affect more than five million Americans a year, with disorders usually beginning in the teens or as early as eight. ...read more.

A mother trying to tell her child to drink milk probably is quite difficult while the Got Milk? commercials increased the consumption and the sales of milk in the United States when advertisements appeared with celebrities ranging from actors to athletes. (Wikipedia). Celebrity is money. It is obvious that celebrity influence have started to take over parental influences among teenagers today. Therefore, celebrities should be aware that their actions have more of an effect on teenagers then many people believe they have and should concern about their portrayal on the media. However, it is not clear which influence are better than another for teenagers creating a majour dilemma for many. Nevertheless, even if these teenagers choose to be influenced by celebrities now, they might end up differently or even just like their parents in the future or vice versa leading into the ongoing debate of nature versus nurture. Their nature can be changed through the way they are nurtured through the influenced of the outside world with media. No matter what, people change throughout out their lives. It's nature. But depending on which paths of influences they choose to take, this nature can create an infinite amount of life path chooses to take. [Word Count: 1392] Sources "Body Image and the Media | MediaWise.org." MediaWise - Media Violence |Brain Development | Children and Media | Childhood Obesity. Web. 9 Apr. 2010. <http://www.mediafamily.org/facts/body_image.shtml>. "Got Milk? - Wikipedia, the Free Encyclopedia." Main Page - Wikipedia, the Free Encyclopedia. 6 Apr. 2010. Web. 8 Apr. 2010. <http://en.wikipedia.org/wiki/Got_milk%3F>. ...read more.