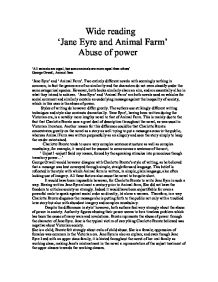 Wide reading 'Jane Eyre and Animal Farm' Abuse of power 'All animals are equal, but some animals are more equal than others' George Orwell, Animal farm 'Jane Eyre' and ' Animal Farm'. Two entirely different novels with seemingly nothing in common, in fact the genres are of no similarity and the characters do not even classify under the same categorical species. However, both books similarly share an aim, and are essentially alike in what they intend to achieve. 'Jane Eyre' and 'Animal Farm' are both novels used as vehicles for social comment and similarly contain an underlying message against the inequality of society, which in this case is the abuse of power. Styles of writing do however differ greatly. The authors use strikingly different writing techniques and style also contrasts dramatically. 'Jane Eyre', having been written during the Victorian era, is a notably more lengthy novel to that of Animal Farm. This is mainly due to the fact that Charlotte Bronte uses a great deal of description throughout the novel, as was usual in Victorian literature. Another reason for this difference could be that Charlotte Bronte concentrates greatly on the novel as a story as well trying to put a message across to the public, whereas Animal Farm was written purposefully as an allegory and uses the story simply to keep the reader entertained. Charlotte Bronte tends to use a very complex sentence structure as well as complex vocabulary, for example, it would not be unusual to come across a sentence of the sort; ' Unjust! -unjust! Said my reason, forced by the agonising stimulus into precocious though transitory power...' George Orwell would however disagree with Charlotte Bronte's style of writing, as he believed that a message was best conveyed through simple, straightforward language. This belief is reflected in the style with which Animal farm is written; in simple, plain language, also often lacking use of imagery. ...read more.

However, when the reader learns how hypocritical his views are, we are forced to loathe him even more. Just as Mr Brocklehurst is giving his speech on humbleness, how all girls are to wear plain, simple cotton frocks and by no means have curly hair otherwise it shall be immediately cut off, his family conveniently arrive to meet him; '...They were splendidly attired in velvet, silk, and furs. The two younger of the trio had grey, beaver hats, then in fashion, shaded in ostrich plumes, and from under the brim of this graceful head-dress fell a profusion light tresses, elaborately curled...a false front of French curls.' So it is in this manner that Mr Brocklehurst runs the school, abusing his power and being able to do so by excusing the poor conditions of the school with religion, rather than spending more money to ensure the well being and health of the students. George Orwell's 'Animal Farm' also uses characters to convey messages concerning social issues, however he also uses them to portray different political historical figures throughout the Russian revolution, highlighting socialism and communism. For example Mr Jones is a representation of Tsar Nicholas ll, or on a wider spectrum, the monarchy. Through Mr Jones's character, who on the literal level of the story is a farmer, the reader is able to determine what George Orwell himself thought of the monarchy prior to and during the Russian revolution. Therefore, the fact that Mr Jones mistreated the animals is a reflection of how Orwell believed the Russian monarchy abused its people; '...Our lives are miserable, laborious and short. We are born, we are given just so much food as will keep the breath in our bodies, and those who are capable of it are forced to work to the last atom of our strength... the life of an animal is misery and slavery.' The quote above formed part of Old Major's speech, a representation of Karl Marx's theories on the benefits of communism. ...read more.

Just as Napoleon murders any animal that questions his actions, Stalin expelled or murdered anybody who spoke out against him. All the seven commandments, the seven unalterable laws by which, it was said, all animals must live for ever after, are throughout the novel altered by the pigs in order to excuse their actions. For example, the fifth commandment, which read; 'no animal shall drink alcohol', is later secretly changed by the pigs to ' no animal shall drink alcohol in excess.' All the animals are ready to accept this, believing they had remembered wrongly and that there were two words they had actually forgotten. The metaphor for alcohol in the novel is actually symbolic of money and represents how the communists in Russia ended up disregarding the ideals of communism, and distributed the money just as unequally and selectively as it had been under the Tsar's capitalist regime. The final event, which confirms undoubtedly to the reader that the pigs have completely abandoned any ideals of animalism they had ever set off with in the first place, occurs in the final chapter of the book; ' ...out of the door of the farmhouse came a long file of pigs, all walking on their hind legs, some did it better than others...everyone of them made his way right round the yard successfully'. All throughout the novel, the most memorable and frequent of chants had been,' four legs good, two legs bad', and now that the pigs have gone against this rule, there seems to be no rule left to break. The pigs have now reached the peak of their tyranny, they have broken every rule there was left to break and abandoned any shred of true communism they still had. There is now no difference between the pigs and the humans, or in other words, the reigns of Stalin and of Tsar Nicholas II; 'The creatures outside looked from pig to man, and from man to pig, and from pig to man again; but already it was impossible to tell which was which.' Zuleika c 10DJ 3,930 words ...read more.