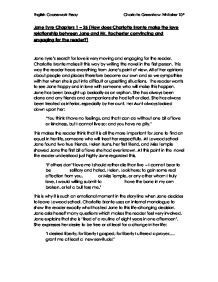 Jane Eyre Chapters 1 - 26 (How does Charlotte Bronte make the love relationship between Jane and Mr. Rochester convincing and engaging for the reader?) Jane Eyre's search for love is very moving and engaging for the reader. Charlotte Bronte makes it this way by writing the novel in the first person. This way the reader hears everything from Jane's point of view. All of her opinions about people and places therefore become our own and so we sympathise with her when she is put into difficult or upsetting situations. The reader wants to see Jane happy and in love with someone who will make this happen. Jane has been brought up basically as an orphan. She has always been alone and any friends and companions she had left or died. She has always been treated as inferior, especially by her aunt. Her Aunt always looked down upon her: 'You think I have no feelings, and that I can do without one bit of love or kindness, but I cannot live so: and you have no pity.' This makes the reader think that it is all the more important for Jane to find an equal in her life, someone who will treat her respectfully. ...read more.

Rochester and she is very independent, she can stand on her own two feet. Most women around that time leaned very heavily on men for almost everything; they weren't allowed an opinion and were just designed to look pretty. Mr Rochester is also different from the norm, he shuns most other contact with others of his age apart from those who he deals with in business and he craves company from more intellectual women. Also, when they first met they both thought of the supernatural. She thought of a Gytrash and he thought of spirits of fairies. This makes them a good match because they are both looking for something a little out of the ordinary. Jane Eyre shows her passion very early on in the novel. She shows she is brave and that she has a clear sense of what is right and wrong when she stands up to her Aunt Reed: 'I am not deceitful: if I were, I should say I loved you; but I declare I do not love you: I dislike you the worst of anybody in the world except John Reed; and this book about the liar, you may give it to your girl Georgiana, for it is she who tells lies, and not I' Jane shows she has a lot of courage by defending herself in front of her Aunt. ...read more.

I see the necessity of departure: and it's like looking on the necessity of death.' She goes on to declare that they are equals: 'I am not talking to you now through the medium of custom, conventionalities, nor even of mortal flesh - it is my spirit that addresses your spirit; just as if... we stood at gods feet, equal as we are.' Mr. Rochester than declares that Jane is the only women for him and who can make him happy. This is convincing for the reader because Mr. Rochester accepts that they are equals and respects her for who she is. Even when he says he loves her he tells of her oddities: 'You - you strange almost unearthly thing! - I love as my own flesh. You - poor and obscure, and small and plain as you are - I entreat to accept me as a husband.' Readers want to believe this, so they are all the more accepting. We as an audience want Jane to be happy. She has had so much hardship and such little love that we feel she needs a happy ending. Everyone who would be put in her shoes would want the same thing as so we feel Jane is just as deserving as most of not more. ?? ?? ?? ?? English Coursework Essay Charlotte Greenhow-Whitaker 10P ...read more.