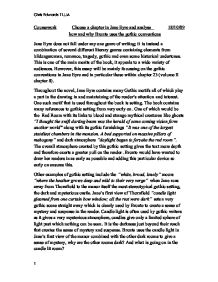 Coursework Choose a chapter in Jane Eyre and analyse 18/10/09 how and why Bronte uses the gothic conventions Jane Eyre does not fall under any one genre of writing; it is instead a combination of several different literary genres containing elements from bildungsroman, romance, tragedy, gothic and even some historical undertones. This is one of the main merits of the book, it appeals to a wide variety of audiences. However, this essay will be mainly focussing on the gothic conventions in Jane Eyre and in particular those within chapter 23 (volume II chapter 8). Throughout the novel, Jane Eyre contains many Gothic motifs all of which play a part in the drawing in and maintaining of the reader's attention and interest. One such motif that is used throughout the book is setting. The book contains many references to gothic setting from very early on. One of which would be the Red Room with its links to blood and strange mythical creatures like ghosts "I thought the swift darting beam was the herald of some coming vision form another world" along with its gothic furnishings "It was one of the largest stateliest chambers in the mansion. ...read more.

Mr Rochester proposing to Jane seems to go along with this theory however very soon after his proposal "the weather changes" and lighting splits a tree in two "a vivid spark leapt out of a cloud". This is highly symbolic; the storm represents holy disapproval of the marriage, as God does not approve of marriage when there is already another wife. As well as this the lightning suggests that Rochester's secrets will split up their marriage, just as lightning split the tree. Another gothic element that Bronte uses in Jane Eyre is the use of monsters and supernatural occurrences both subtle and explicit. Throughout the book there are references to various "fairies, goblins, imps and elves" as well as the mythical "Gytrash" .When Jane meets Mr Rochester she herself is also regularly referred to as a "witch or imp" by Mr Rochester although this could just be ironic as she is very plain. In addition, there is the most obvious monster, Bertha Mason "In the deep shade, at the farther end of the room, a figure ran backwards and forwards. ...read more.

The characters also play a part in the gothic conventions within Jane Eyre, Mr Rochester fulfils the role of both a tragic and Byronic hero with his gloomy nature and dark secrets. An example of his secrets can be found in chapter 23 where even when he proposed to Jane he made it seem as though he was going to in fact marry Blanche not Jane. He is still not telling her the whole truth it is ironic that the quote "your bride stands between us" where Jane is of course referring to Blanche in fact foreshadows the problems with Bertha Mason. Other characters that can be seen as gothic include the vampiric Bertha and the mysterious Grace Poole. The gothic nature of these characters brings more excitement and mystery to the novel. Bronte uses the gothic conventions within Jane Eyre in variety of ways, with the scenery and setting, the use of monsters and supernatural and the characters themselves to both intrigue and excite the reader making them look deeper into the text and question the events and actions within. By Chris Edwards 11JJA ?? ?? ?? ?? Chris Edwards 11JJA 1 ...read more.