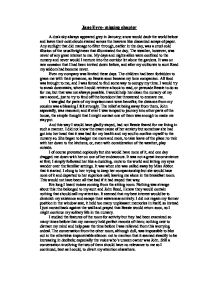 Jane Eyre- missing chapter A dusk sky always appeared grey in January; snow would daub the world below and leave their cold clouds stained across the heavens like discarded scraps of paper. Any sunlight that did manage to filter through, earlier in the day, was a cruel cold illusion of the usual brightness that illuminated the day. The weather, however, was never of any great interest to me. My days and nights alike were confined to the nursery and never would I venture into the corridor let alone the gardens. It was on rare occasion that I had been invited down before, and after my outbursts to aunt Reed my seldom had become never. Even my company was limited these days. The children had been forbidden to grace me with their presence, so Bessie soon became my lone companion. All food was brought to me, and I was forced to find some way to occupy my time. I would try to sneak downstairs, where I could retrieve a book to read, or persuade Bessie to do so for me, but that was not always possible. ...read more.

Life at Gateshead was a miserable one in any case but so much less was its burden felt with the absence of John. Even though I had relinquished my stance by the door, the argument that continued was clearly audible, one participant more so then the other. Again trying to redirect my attention I began to watch the snow outside through a pane of glass fitted into the door. The flakes were still falling and had been for a great deal of the morning. Their fluttering dance was enchanting and I (thoughtless to th goings on around me) found myself studying their progress with apt devotion. I was entranced by their pure white flicker that obscured all else, and yet they accomplished this despite their minuscule size. They rode on the breath of the wind, gravity seemingly an irrelevant after thought, moving through twists and turns plotted unseen in the air and impossible for my eye to follow however hard I tried. It was a relaxing mood that fell over me, watching the white screen everything else from me. To just see white, not to hear, not to feel, to just see white. ...read more.

There was no chance I would have made it back to the door on my own and I was lucky John wasn't really a clever boy. For when Bessie came to collect me he had gone, intending to leave me to my cold grave, and so that may have been had not Bessie's short search for me led her to the melted puddles upon the breakfast room floor. She flung open the door and pulled me in with a single arm. She carried me up to the Nursery, changed my clothes and put me straight to bed. She was fussing the whole time but I heard none of it; I just remember weeping as the feeling came back to my limbs and brought with it insurmountable pain, weeping of the shock at what had just happened. Bessie fetched me a clay hot water bottle from the kitchens and soon I was sleeping. I spent a great deal of time asleep over the next few days and all of them confined to my bed. Bessie scolded me dearly for venturing outside and if she believed me when I told her John was the cause then she said nothing to me. ...read more.