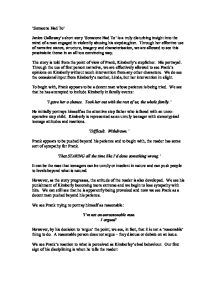 Janice Galloway's short story 'Someone Had To' - review

'Someone Had To' Janice Galloway's short story 'Someone Had To' is a truly disturbing insight into the mind of a man engaged in violently abusing his stepdaughter. Through her effective use of narrative stance, structure, imagery and characterisation, we are allowed to see this pessimistic theme in an all too convincing way. The story is told from the point of view of Frank, Kimberly's stepfather. His portrayal . Through the use of first person narrative, we are effectively allowed to see Frank's opinions on Kimberly without much intervention from any other characters. We do see the occasional input from Kimberly's mother, Linda, but her intervention in slight. To begin with, Frank appears to be a decent man whose patience is being tried. We see that he has attempted to include Kimberly in family events: 'I gave her a chance. Took her out with the rest of us, the whole family.' He initially portrays himself as the attentive step father who is faced with an unco-operative step child. ...read more.

His next punishment begins to show how unreasonable he actually is. When he puts Kimberley in the corner, all she does is 'just stood there'. Frank's expression is one of despair but the reader is beginning to wonder what else he expected her to do. She is simply doing what he told her to do and he is finding fault with that. We are beginning to see that Frank is not necessarily the man we originally thought he was. His next punishment is where we really start to see him lose control. He puts Kimberley in a cupboard. At this point, Kimberely's mother, Linda, seems to intervene, as Frank says: 'I AM NOT LOCKING THE DOOR LINDA' but he does turn out the light and when Kimberley reacts in a perfectly natural way and is distressed, Frank takes this as further defiance and started whining. The imagery used to describe the noise she makes is truly distressing: 'like a collared bitch' He sees her as an animal, like the 'spaniel' referred to earlier in the story. ...read more.

but when the final revelation about the girl's age is given to us, we see him for the horrific monster he is. He continues his abuse, burning her with cigarettes, wondering at how she doesn't cry out, until his final punishment. At the end of the story, we are left with the scene of Frank holding Kimberley over a bath of boiling water. The horrific image is left incomplete - we don't know if he throws her in or not. The final lines of the story tail off down the page: "Those big blue eyes still staring up like butter wouldn't melt" The imagery implies that although butter wouldn't melt, Kimberley certainly could in a bath of hot water. The spacing of the words shows the length of time they spend staring at each other and the lack of a full stop at the end shows that the action continues. We, the reader, are left shocked, devastated and ultimately hoping that someone will intervene, someone would stop the cruelty. The reader knows that 'someone had to'. ...read more.