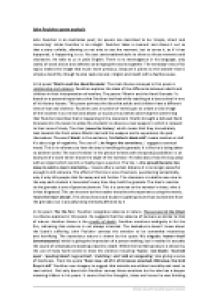 ﻿John Foulcher poem analysis John Foulcher is an Australian poet; his poems are described to be ?simple, direct and convincing?. Johan Foulcher is an imagist. Foulcher takes a moment and draws it out so that a story unfolds, allowing us not only to see the moment, but to sense it, as if it has happened, is happening, to us. He uses conversational style to show us these moments and characters. He talks to us in plain English. There is no extravagance in his language, only clarity of word choice and deftness at stringing the words together. The everyday-ness of his topics makes the image that much more precious, because it points to the wonder that is simply a lived life; though he also captures war, religion and death with a faultless ease. In his poem ?Martin and the Hand Grenade.? The main theme conveyed in this poem is relationship and violence. ...read more.

It's also a sign of negativity. The use of '...he fingers the serrations...' suggests a sensual mood. This is in reference to how the boy is handling the grenade. It is like he is being taken to another world. The word 'bristles' in the phrase 'bristles with shrapnel/possibilities? is an example of a word which shows the anger of the narrator. He talks about how the boy plays with an object which can kill, or badly injure a person. The line '...the spread/became too loose to catch a man's mortality...? means after a certain distance it is no longer powerful enough to kill someone. The effect of this line is one of sarcasm, questioning sarcastically, why it only kills people that far away and not further. The classroom is a battle zone due to the way each student is 'wounded' every time they hold the grenade. ...read more.

Whilst the horrifying nature is shown by the use of many harsh words to show the violence including: 'hacks', 'axe-blade', 'stunned open', 'pouting blood', legs arched?, ?clutching', and 'cold air congealing' also giving a sense of harshness. From the quote ?Even now, all of it of its bones smashed. Oblivious, the bird flays it still? Foulcher uses imagery to suggest that animals are without morality and react to raw instinct. Not only does John Foulcher convey those emotions but he also has a deeper meaning hidden in his poem. It seems that the thoughts, ideas and issues he was thinking of whilst writing this poem all relate back to his view on society, nature and mistreatment. Society is shown as nature in a somewhat survival of the fittest aspect and it also portrays peoples mistreatment in many ways. Examples of these ways are shown in the poem by the way the man reacts with all this violence going on around him; He just ignores it all, takes what he came for and leaves. ________________ Shirley Ho-John Foulcher poem analysis ...read more.