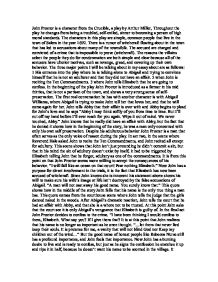 John Proctor - from the Crucible, a play by Arthur Miller.

John Proctor is a character from the Crucible, a play by Arthur Miller, Throughout the play he changes from being a troubled, self-exiled, sinner to becoming a person of high moral standards. The characters in this play are simple, common people that live in the town of Salem in the year 1692. There is a rumor of witchcraft floating about in the town that has led to accusations about many of the townsfolk. The accused are charged and convicted of a crime that is impossible to prove (witchcraft). The reasons the villains select the people they do for condemnation are both simple and clear because all of the accusers have ulterior motives, such as revenge, greed, and covering up their own behavior. The three major points I will be talking about in my essay about are as follows: 1 His entrance into the play where he is talking alone to Abigail and trying to convince himself that he is not an adulterer and that they did not have an affair. 2 when John is reciting the Ten Commandments. 3 where John tells Elizabeth that he are going to confess. In the beginning of the play John Proctor is introduced as a farmer in his mid thirties, that is not a partisan of the town, and shows a very strong sense of self-preservation. The first real conversation he has with another character is with Abigail Williams, where Abigail is trying to make John tell her that loves her, and that he will come again for her. ...read more.

John Proctor's story is the heart of the play. He represents both the cowardice and courage that Miller sees in everyone in the play, and in the world, caught in dangers beyond their control. His initial reaction is to protect himself only. With time he believes that he needs to protect others, not only himself. But in the end he comes to realize that all he can do and must do is to protect the truth, even at the cost of his own life. By doing so he finally saves his own 'name', his truth, and his life, in a different way. This is what Miller is trying to tell us, that there are some things more important than life itself. Word Count: 971 Abigail is one of the accused girls and also happens to be the Reverend's niece. Following these events he tries to save the lives of innocent towns people by admitting to this horrible offense of adultery, but ends up losing the trial along with his life. He did have a chance to live but instead of signing away his name to keep his life, he wanted to die honorably with his friends, rather than live a life of guilt and carry a blackened name. John Proctors decision to die is reasonable and believable. Proctor has come to regard himself as a king of fraud as long as he remains obedient to an authority in which he cannot respect. As John talks with his wife Elizabeth discussing the matter of whether or not he shall confess, he tells her of what a fraud he is. ...read more.

He has to choose and his choice was to die which was a choice to commit himself to his friends and die honorable as an honest man. One thing he reflects on is this: "I have three children - how may I teach them to walk like men in the world, and I sold my friends?" (The Crucible, 143). John will not be able to face anyone if he lives because they will see a liar, a coward and an unmoral man. If he were to sign away his friends, then he and his family would carry that forever and he would not be remembered as a friend, but rather as a foe. His choice to die will have him leave this world being remembered for his honor, and dignity, not only to his family and friends but to himself as well. John Proctor's frequent absences from church services didn't exactly gain him favor in the eyes of other disciplined puritans. Having an affair with a young girl no less did not help matters much either. But by following his character and reading into him, it can be detected that he really was a just man. He was an imperfect human being like the rest of the town. He was made of flesh and therefore made mistakes like everyone else. But his intentions were for the good of his family. Because John came to the conclusion on his own and because it was a righteous and un-selfish act, John Proctors decision to tell the truth and be put to death for it is true and justifiable. Word Count: 1141 ...read more.