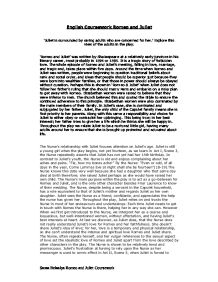 Juliet is surrounded by caring adults who are concerned for her.' Explore this view of the adults in the play.

English Coursework Romeo and Juliet 'Juliet is surrounded by caring adults who are concerned for her.' Explore this view of the adults in the play. 'Romeo and Juliet' was written by Shakespeare at a relatively early juncture in his literary career, most probably in 1594 or 1595. It is a tragic story of forbidden love. The whole episode of Romeo and Juliet's meeting, falling in love, marriage, and tragic end, takes place within five days. Around the time when Romeo and Juliet was written, people were beginning to question traditional beliefs about rank and social order, and ideas that people should be superior just because they were born into wealthier families, or that those in power should always be obeyed without question. Perhaps this is shown in 'Romeo & Juliet' when Juliet does not follow her father's ruling that she should marry Paris and embarks on a risky plan to get away with Romeo. Elizabethan women were raised to believe that they were inferior to men. The church believed this and quoted the Bible to ensure the continued adherence to this principle. Elizabethan women were also dominated by the male members of their family. In Juliet's case, she is dominated and subjugated by her father. Juliet, the only child of the Capulet family means she is first priority to her parents. Along with this came a responsibility and choice for Juliet to either obey or contradict her upbringing. This being true; in her best interest; her father tries to give her a life which he thinks she will be happy in. Throughout the play we relate Juliet to be a nurtured little girl, having many adults around her to ensure that she is brought up protected and educated about life. The Nurse's relationship with Juliet focuses attention on Juliet's age. Juliet is still a young girl when the play begins, not yet fourteen, as we learn in Act I, Scene 3, the Nurse repeatedly asserts that Juliet has not yet had her 14th birthday. ...read more.

Towards the end when Lady Capulet believes that her daughter Juliet has died her feelings and emotions towards her have changed dramatically and visibly. It is almost as if Lady Capulet has shown her only daughter her most concern and sympathy when she thinks she is dead. "O me, O me, my child, my only life! Revive look up, or I will call thee help, help! Call help." Lady Capulet's reaction is again, ambiguous. She grieves for her lost Juliet, and yet her final words suggest a kind of self-concern. "O me! This sight of death is as a bell. That warns my old age to a sepulcher." Lord Capulet has a philosophical and idealistic perspective and wants the wedding to go ahead on time. Lord Capulet changes his mind about when Juliet should get married; this is because he has had time to consider Paris' proposal and now believes that he has Juliet's best interests at heart. He thinks Juliet will obey him and 'be ruled in all respects' by him. He hasn't consulted his daughter about marriage to Paris but believes, foolishly, that she will obey him. He may believe that by marrying her to Paris her grief for Tybalt will be forgotten and she will become happy once again. With such a sudden change in Lord Capulet's behaviour; it influences our view of him as a father in many aspects; he is now portrayed as a father who wants to be in control and have power over his daughter and her life. Before knowing that Juliet does not agree with his decision for her to marry Paris he tries to comfort her when he intervenes and mistakes Juliet's tears for her grieving over Tybalt's death. "What, still in tears? Evermore showering? In one little body Thou counterfeit'st a bark, a sea, a wind; For still thy eyes, which I may call the sea, Do ebb and flow with tears; the bark thy body is, Sailing in this salt flood; the winds thy sighs who, raging with thy tears, and they with them, without a sudden calm, will overset thy tempest-tossed body?" ...read more.

They should have paid more attention to Juliet's wishes and listened to her opinions. They were too hard on her when she refused to marry Paris. Lord and Lady Montague, like the Capulets, were also responsible for keeping the feud going. If they had been more understanding, Romeo would not have felt he had to keep secrets from them. The nurse is at fault as much as Juliet's parents. The nurse; knowing that Juliet confides in her more than she does her own mother; should have taken much more responsibility over Juliet. In my view it is ironic that what is to be blamed for the death of Romeo and Juliet can not be punished nor pardoned. The tragedy was not the fault of any one individual but fate played a part in this tragic ending of Romeo and Juliet. In modern times, and in the Elizabethan era, fate played an important role in people's lives. Many people believe it to be written in stone, and unchangeable. Many others believe it to be controlled by a person's own actions. In Romeo and Juliet, fate is one of the main themes, described as having power over many of the events in the play. Fate is often called upon, wondered about, and blamed for mishaps. However, where fate is blamed in the play as the ultimate cause for a mishap, there is always an underlying action, or combination of them, on the part of human beings that decides the consequences. The play Romeo and Juliet brings out a theme of fate, which turns out only to be surface deep. Behind each instance of ill fate is an underlying weakness on the part of one or more persons that dictate the results. Finally, almost all of the 'ill fated' instances are easily traced to Friar Laurence, who himself represents the idea that fate does not exist, giving the conclusion that human weakness, the loss of self-control, is the force behind ill mishaps, not fate. Sanaa Belaalya Romeo and Juliet ?? ?? ?? ?? Sanaa Belaalya Romeo and Juliet Coursework ...read more.