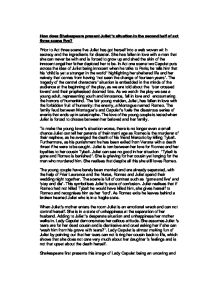 How does Shakespeare present Juliet's situation in the second half of act three scene five? Prior to Act three scene five Juliet has got herself into a web woven with secrecy and the ingredients for disaster. She has fallen in love with a man that she can never be with and is forced to grow up and shed the skin of the innocent angel her father depicted her to be. In Act one scene two Capulet puts across the idea of Juliet being innocent when he talks to Paris; he tells him that his 'child is yet a stranger in the world' highlighting her sheltered life and her naivety that comes from having 'not seen the change of fourteen years'. The tragedy of the central characters' situation is embedded in the minds of the audience at the beginning of the play, as we are told about the 'star crossed lovers' and their prophesised doomed fate. As we watch the play we see a young adult, representing youth and innocence, fall in love and encountering the horrors of humankind. The fair young maiden, Juliet, has fallen in love with the forbidden fruit of humanity: the enemy, a Montague named Romeo. The family feud between Montague's and Capulet's fuels the disastrous series of events that ends up in catastrophe. The love of the young couple is tested when Juliet is forced to choose between her beloved and her family. To make the young lover's situation worse, there is no longer even a small chance Juliet can tell her parents of their marriage as Romeo is the murderer of their nephew, as he avenged the death of his friend Mercutio by killing Tybalt. ...read more.

The plosive 'b' sound demonstrates that he is trying to intimidate her with aggression and force, he is making sure that she knows he's in charge. As well as intimidation he uses language to demote her by telling her to 'fettle your fine joints'. This is harsh and vulgar, he is telling Juliet to get her body ready and to be prepared to get married. The word 'fine' is sarcastic, the combination of sarcasm and alliteration of the letter 'f' hints that he is enjoying making fun of Juliet. In addition, Capulet's words paints the picture that Juliet is sub-human. A stable groom would 'fettle' horses so by saying this insulting, animalistic term to Juliet he is implying that she should be treated like an animal. At this point Capulet is furious at his daughters refusal to marry Paris, he goes on to take Juliet's polite speech and twist her words saying 'Thank me no thankings, nor proud me no prouds' in order to prove her 'chop logic'. By Capulet repeating the imperatives 'thank' and 'proud' exemplifies his subtext; he is telling Juliet that she needs to listen to him. To explore Capulet's fury fully, we need to examine how 16th century fathers treated the idea of marriage. In Elizabethan times England was a hierarchical society. Everyone knew their place and were expected to defer to their superiors. It was also a patriarchal society were men held all the power. Women were viewed as inferior and were useful to their family as pawns aiding them to climb the financial and social ranks of society: this was done by marrying into a higher family. ...read more.

It could be this that pushes Juliet into taking her own life at the end of the play as she feels like, other than Romeo, there is no one else out there for her. At the end of Act 3 scene 5, after the nurse exits leaving Juliet alone, Juliet makes a speech addressing the audience. She declares she no longer trusts anyone and insists that the nurse has given her bad advice. She can not believe that she values her getting married and living a normal life over true love. Juliet feels like she has been abandoned by both her nurse and Romeo. It is now that we see Juliet evolving from the naive girl that she was in the beginning. That innocent child who used to blindly follow the commands of her parents disappears, replaced by a strong and independent women. She makes the decision that 'if all else fail, myself have the power to die.' meaning that should it come to it, she is prepared to kill herself. We, as an audience, admire her bravery as she takes control of her own destiny. It is this image of Juliet's empowerment that we are left with at the end of the play. She is not someone to pity or sympathize with; Juliet has looked at her desperate situation and seen a way out. She realises that if she does end up taking her own life she will be set free; she will finally be unleashed from the chains her parents have confounded her with. ...read more.