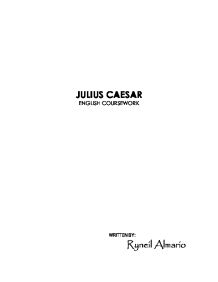 JULIUS CAESAR ENGLISH COURSEWORK WRITTEN BY: Ryneil Almario Is Mark Antony a loyal friend to Caesar or a skilful politician working for his own ends? William Shakespeare was an English poet and playwright, who was widely regarded as the greatest writer in the English language. He was born and raised in Stratford-upon-Avon, Warwickshire, England, in April 1564, the son of John Shakespeare, a successful glove maker and of Mary Arden, a daughter of the gentry. At the age of 18, he married Anne Hathaway, with whom he had three children. Between 1585 and 1592, he began a successful career in London as an actor, writer and part owner of a playing company. He appears to have retired to Stratford at around 1613, where he died three years later. Shakespeare wrote at least 37 plays and collaborated on several more. Many of these plays were very successful both at court and in the public playhouses. His plays were comedies, tragedies and histories. His 17 comedies include A Midsummer Night's Dream and The Merchant of Venice. Among his 10 history plays are Henry V and Richard III. The most famous among his 10 tragedies are Hamlet, Othello, and King Lear. Shakespeare's comedy in its Elizabethan usage had a very different meaning when compared to modern comedies. A Shakespearean comedy is one that has a happy ending, usually marriage for all the unmarried characters, and a tone and style that is more lighthearted than Shakespeare's other plays. Shakespearean comedies usually tend to have: a struggle of young lovers to overcome the difficulty that is often presented by elders, separation and unification, mistaken identities, a clever servant, heightened tensions within a family and a number of intertwining plots. There is also a frequent use of puns. Several of Shakespeare's comedies such as Measure for Measure and All's Well That Ends Well, have an unusual tone with a difficult mix of humour and tragedy which has led them to be classified as problem plays or tragicomedies. ...read more.

Mark Antony's eulogy implies a rather unique approach. He began his speech by addressing the crowd as 'Friends', to gain their trust and to make them believe that he was indeed their friend rather than a Senator trying to gain power. He then went on to say, "I come to bury Caesar, not to praise him," therefore he can carry on praising Caesar without the crowd interrupting. His speech seemed very sincere when he said, "The noble Brutus hath told you Caesar was ambitious.... For Brutus is an honourable man". The repetition of this statement for more than three times builds up a sense of sarcasm. During the course of the speech Antony said that according to Brutus, Caesar was becoming ambitious, and indeed Brutus was an honourable man. Since the people responded positively to Brutus' speech, Antony could not directly disapprove of his frankness and honesty in an obvious manner. Yet, Antony rejected the fact that Caesar was ambitious. He proves this in three unusual circumstances. One incident was when he gave the ransom of captives to the public treasury rather than keep them for himself; another was whenever he wept with the poor people. Finally, another example was when he was offered kingship by Mark Antony and he refused it, not only once but three times. A person who was a power hungry tyrant would not have done such things. Antony says, "I speak not to disprove what Brutus spoke," but in reality that is exactly what he does. Antony uses a dramatic effect to gain the citizens sympathies. He achieves this, firstly by entering on stage with Caesar's body and then by ending his statement saying that his heart remains with Caesar's dead body. He weeps while ending his speech, silently gaining the people's trust. In one of the most famous speeches considered in all literature, Antony was able to turn the crowd against the conspirators, "Friends, Romans, countrymen, lend me your ears; I come to bury Caesar, not to praise him..." ...read more.

Antony's funeral speech revealed his magnificent gift as a speechmaker. It shows that he is a master of mob psychology. With purposeful cunningness, he worked on the emotions of the crowd and turns them against the conspirators. When the rebellion started, he said "Now let it work. Mischief, thou art afoot, Take thou what course thou wilt." There are times that Antony seems reckless. He takes risks like a gambler. But he also displays the power to control any situation. From being 'a marker and reveler' he rises to the position of a statesman and a commander who controls the destiny of one half of the Roman Empire. Towards the end of the play, Antony seems satisfied. He is no longer an opportunist, a merry-maker or an orator. He has destroyed the army of Cassius and is victorious in the second battle against Brutus. He has proven himself to be a man of courage, action, loyalty and foresight. Mark Antony's success in the battle does not make him proud or self-righteous and he is noble in his dealings with some of the prisoners of the war. As politician, Antony is ruthless and yet practical. His character is a contrast compared to the idealist Brutus. And yet Antony has his own admirable qualities. He has energy and intelligence; he can be genuine in his feelings and he appreciates the merits of others. Antony's cunningness and his revelation to only use Lepidus as a tool, signifies his ruthlessness and ability to change the people's minds. He proves himself not only strong in character, but in spirit as well. He is no longer the same happy-go-lucky sportsman, during the Feast of Lupercal, in the eyes of the audience, but a very admiring and powerful leader. He is greatly admired for his strong and powerful character, as well as his gift as an orator. Mark Antony is indeed a loyal and faithful friend to Julius Caesar, although suspicion remains that his actions was a result of a politician working to receive his desired position. ...read more.