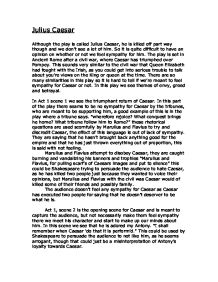 Julius Caesar Although the play is called Julius Caesar, he is killed off part way though and we don't see a lot of him. So it is quite difficult to have an opinion on whether or not we feel sympathy for him. The play is set in Ancient Rome after a civil war, where Caesar has triumphed over Pompey. This sounds very similar to the civil war that Queen Elizabeth had fought with the Irish, as you could get into serious trouble to talk about you're views on the King or queen at the time. There are so many similarities in this play so it is hard to tell if we're meant to feel sympathy for Caesar or not. In this play we see themes of envy, greed and betrayal. In Act 1 scene 1 we see the triumphant return of Caesar. In this part of the play there seams to be no sympathy for Caesar by the tribunes, who are meant to be supporting him, a good example of this is in the play where a tribune says. "wherefore rejoice? ...read more.

Metaphors, similies and imagery are used all throughout the play by Shakespeare. In Act 2, scene 1 Brutus talks about how close Antony and Caesar are. "For Antony is but a limb of Caesar" form this metaphor, we get the sense that Antony and Caesar are so close that they are almost one, from this we relies that Antony will be incredibly upset when Caesar is killed. Thought saying that a limb is there to be used, perhaps he is trying to say that Caesar uses him at the same time as discrediting the loyal Antony. Friendship is another theme of the play, as it's from Brutu's friendship that he thinks Caesar will be come a tyrant in his very powerful position as head of the Roman Empire. Similes are used by Cassius to show Caesar as week" as a sick girl" are often used throughout the play, mostly to show Caesar as weak, overly superior, or arrogant. In Act 2, scene 1 we see Brutus, he seems to be very worried and stressed about something "I would it were my fault to sleep so soundly." ...read more.

Caesar then replies "what touched us ourselve shall be last served" this could been seen as a very benevolent and selfless thing and something a true leader would do. Making the audience then feel sympathy for him. The last thing Caesar says catches the audience out, making them feel all the more sympathetic towards him. "Et tu, Brute." This is Latin for "even you Brutus". In conclusion Julius Caesar is said to be a tyrant throughout the play, but he is mostly said to be a tyrant by those who envy him. Jealousy has persuaded his friends against him and made them murder him. Overall there are many points that make the audience feel sympathetic towards Caesar, what his last words were before he died for example. But there are also part of the play that make the audience not show any sympathy towards him for example when Caesar is shown as being arrogant and ignoring the warnings telling him that he is being plotted against . So it's quite difficult to tell whether or not Shakespeare is trying to make the audience feel sympathy for him. ...read more.