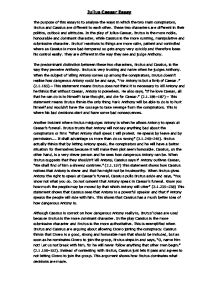 Julius Caesar Essay The purpose of this essay is to analyse the ways in which the two main conspirators, Brutus and Cassius are different to each other. These two characters are different in their politics, outlook and attitudes. In the play of Julius Caesar, Brutus is the more noble, honourable and dominant character, while Cassius is the more cunning, manipulative and submissive character. Brutus' reactions to things are more calm, patient and controlled where as Cassius is more bad-tempered so gets angry very quickly and therefore loses his control easily. They are different in the way they see and judge Anthony. The predominant distinction between these two characters, Brutus and Cassius, is the way they perceive Anthony. Brutus is very trusting and naive when he judges Anthony. When the subject of killing Antony comes up among the conspirators, Brutus doesn't realise how dangerous Antony could be and says, "For Antony is but a limb of Caesar." ...read more.

Cassius, on the other hand, is a very clever person and he sees how dangerous Antony can be. When Brutus suggests that they shouldn't kill Antony, Cassius says if Antony outlives Caesar, "We shall find of him a shrewd contriver." (2.1.157) This statement shows how Cassius notices that Antony is clever and that he might not be trustworthy. When Brutus gives Antony the right to speak at Caesar's funeral, Cassius pulls Brutus aside and says, "You know not what you do. Do not consent that Antony speak in Caesar's funeral. Know you how much the people may be moved by that which Antony will utter" (3.1.235-238) This statement shows that Cassius sees that Antony is a powerful speaker and that if Antony speaks the people will side with him. This shows that Cassius has a much better idea of how dangerous Antony is. Although Cassius is correct on how dangerous Antony really is, Brutus' ideas are used because Brutus is the more dominant character. ...read more.

(4.3.197-200). This is a good idea, but Brutus shows his superiority over Cassius by replying, "Good reasons must by force give place by better..." (4.3.201). Brutus then states his reason: if they get to Philipi first, they will have the better position. Cassius, who has a good argument, does not even try to contest Brutus. He backs down and says, "Then with your will, go on" (4.3.223). This decision leads to their armies losing and to the end of both their lives. Brutus and Cassius are contrasting characters. They contrast in the way they perceive Anthony. Also, in the play, Brutus did everything for the good of Rome because he actually cared about it but Cassius was being very selfish and did it just because he was jealous about it. This can be exemplified when Brutus and Cassius are discussing the reasons why they should kill Caesar. The two characters decisions lead them to die in the end but altogether they played an important part in Shakespeare's tragedy of Julius Caesar. ...read more.