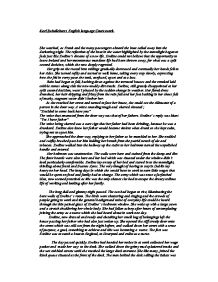 Karl Swindlehurst English language Coursework. She watched, as Frank and the many passengers aboard the boat sailed away into the darkening night. The reflection of the boat in the water highlighted by the moonlight began to fade just like Eveline's dreams of a new life. Eveline could not believe that the opportunity to leave Ireland and her monotonous mundane life had been thrown away, for what was a split second decision, which she now deeply regretted. Her grip on the rusted iron railings gradually decreased and eventually her hands fell to her sides. She turned softly and started to walk home, taking every step slowly, expressing how she felt in every pace she took, confused, upset and at a loss. Rain had begun to fall, bashing down against the terraced houses and the crooked laid cobble stones along side the now muddy dirt tracks. Eveline, still greatly disappointed at her split second decision, wasn't phased by the sudden change in weather. Her floral dress drenched, her hair dripping and frizzy from the rain fall and her feet bathing in her shoes full of murky, stagnant water didn't bother her. ...read more.

She walked down the grimy mud splattered tracks and the wet cobbled streets until she reached the large dock entrance. She like many, joined the kiosk queue situated at the front of the dock. The man behind the desk selling the tickets was greasy, slimy and was corpulent in appearance. "What do you want love" Eveline replied with a soft and timid voice " Liverpool one way please" The large man behind the desk looked bewildered as to why a young girl of her age was buying a ticket to Liverpool. However he did not say anything and gave her the ticket, and she, made for the dock in which the boat was leaving soon. As she approached the boat, a large group of people seemed to be creating a commotion. Eveline looked in total disbelief as one of the people in the crowd was Frank. She rushed over, pushing her way through the people congregated by the troubled dock worker trying to sort out the crowd. The dock worker who was standing on large stacked boxes to see over the crowd, seemed to be trying to explain what the problem was. ...read more.

She approach the clerk at the enlisting desk. "I'd like to enrol as a Voluntary Nurse, please." " Okay, fill in your details and I'll just check through them" the clerk replied Eveline looked at the form, filled in her details and handed it in to the man. The man looked at her form and then at Eveline, inwardly regretting what had to be said. "I'm awful sorry, your not old enough to enrol, you have to be at least twenty three" Eveline's response was delayed. Eveline looked at the time in the hallway, and then nodded with acknowledgement that she could not enrol and left. The morning was considerably warmer than the night before. Eveline, removed her overthrow as she was too hot. She had to find a job. She didn't want to return to Ireland. The day passed and fortunately Eveline had found a place to live with her new employer who had given her a job as a scullery maid. The months passed by. Eveline was now comfortable and a lot happier. She had found herself a boyfriend, a stable job, and a nice home. Ireland was now in the past and her home was to be Liverpool. ?? ?? ?? ?? ...read more.