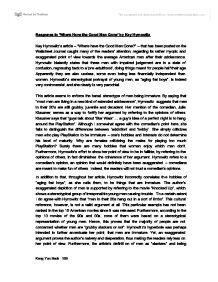 Kay Hymowitzs article Where have the Good Men Gone? that has been posted on the Wallstreet Journal caught many of the readers attention, regarding its rather myopic and exaggerated point of view towards the average American men after t

Response to 'Where Have the Good Men Gone' by Kay Hymowitz Kay Hymowitz's article - "Where have the Good Men Gone?" - that has been posted on the Wallstreet Journal caught many of the readers' attention, regarding its rather myopic and exaggerated point of view towards the average American men after their adolescence. Hymowitz blatantly states that these men with impaired judgement are in a state of confusion, regressing back to a 'pre-adulthood', doing things meant for people half their age. Apparently they are also useless, some even being less financially independent than women. Hymowitz's stereotypical portrayal of young men, as "aging frat boys", is indeed very controversial, and she clearly is very parochial. This article seems to enforce the banal stereotype of men being immature. By saying that "most men are living in a new kind of extended adolescence", Hymowitz suggests that men in their 20's are still grubby, juvenile and decadent. Her mention of the comedian, Julie Klausner, serves as a way to fortify her argument by referring to the opinions of others. Klausner says that "guys talk about 'Star Wars' ... ...read more.

This cultural reference, however, is not a valid argument at all. This particular example has not been ranked in the top 10 American movies since it was released. Furthermore, according to the top 10 movies of the 90s and 00s, none of them were based on a stereotypical representation of young men. Hence, this proves that the majority of people are not concerned whether men are "grubby slackers or not". Hymowitz's hyperbole was perhaps intended to further accentuate her point, that men are immature. Yet, an exaggerated argument proves the author's naivety and desperation, thus making the readers rely less on her point of view. Furthermore, the article's definition of men as "slackers" and being "maladroit" is not justified. A study from 2007, by Helmuth Nyborg, showed that males aged 17 and 18 had an average IQ of 4.2 points higher than the females and that males are more intelligent and achieving more academically, proving that men were not "slackers". Hymowitz believes that women "are the first sex", superior to men. Her use of statistics - "among American ages 25 to 34, 34% of the women now have a bachelor's degree but just 27% of men" - may prove how women are more diligent, hardworking and focused, and that men do not possess such qualities. ...read more.

This imprecision and vagueness may initially have started from her lack of confidence and her obstinacy to yield the fact that women, indeed, are not the "first sex". As is clearly shown, this argument originated from a falsehood, where the author tried hard to make the argument sound coherent. I can only conclude that Hymowitz's myopic interpretation of men as "aging frat boys" is unconvincing, flawed and discordant. Hymowitz does not have a coherent idea of what she is arguing about - it certainly seems that her article consists of only the remnants of her illogical point of view. Kay S. Hymowitz manages to execute her argument with some valid evidence. But even if some of her points may be true, her overall argument is evidently effete. Angrily reading her article, her opinions are very different my personal opinions. Therefore I strongly feel that her article does not correctly describe the average men in their 20's. Hymowitz states that too many men are living in a new kind of extended adolescence. However, as a teenage boy, I strongly disagree with Hymowitz's myopic, prejudiced and unproven interpretation of the young men, which I do not believe has been fully justified. ?? ?? ?? ?? Kang Yun Seok 10S ...read more.

This task is set to test the candidates' ability to argue. One of the hardest things about an argument is that, at GCSE level, there must be a clear appreciation of an opposing view. This may appear illogical and to ...

This task is set to test the candidates' ability to argue. One of the hardest things about an argument is that, at GCSE level, there must be a clear appreciation of an opposing view. This may appear illogical and to many real life argumentative articles is completely unrealistic, but candidates must adhere to the requirements of the question and the syllabus. This candidate has a clear-cut argument to voice, and uses a huge array of linguistic devices to convey their argument. A further exploration into that all-elusive counter-argument may have served the candidate well, but nonetheless, this is an extremely well-written and passionate argument against a hypothesis.

The Level of Analysis is very good indeed. Incorporating many elements of a successful argument such as authoritative language; a variety of powerful adjectives; use of triples, alliteration, and repetition ("myopic interpretation", "ageing frat boys"); and evidence of their own real life accounts of men who have done well for themselves, this candidate constructs a hugely convincing arguments against the rather deterministic and pessimistic view of Kay S. Hymowitz.
The candidate could, in order to make their answer even stronger, address a wider range of comments made in the 'Where Have All The Good Men Gone?' article and also provided a secondary opinion to strengthen the rationality of their argument. However, the sheer enthusiasm of the candidate combined with their masterful use of the English language mean that this argument is both convincing, powerful and potent.

The Quality of Written Communication is less impressive, but no errors within the answer compromise any it's impressive qualities.