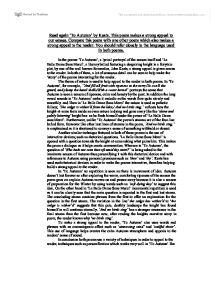 Keats. In the poems To Autumn, a lyrical portrayal of the season itself and La Belle Dame Sans Merci, a literary ballad featuring a despairing knight in a fairytale plot,

is emphasised as it is shortened to convey a sense of something withheld or absent. Another similar technique featured in both of these poems is the use of interactive devices; such as rhetorical questions. 'La Belle Dame Sans Merci' is opened with a question towards the knight-at-arms asking what pains him. This makes the poem a dialogue as it helps create conversation. Whereas in 'To Autumn', the question of 'Who hath not seen thee oft amid thy store?' is being asked to the inanimate season of Autumn thus personifying it with this rhetorical device and with references to Autumn using personal pronouns such as 'thee' and 'thy'. Keats has used such rhetorical devices in order to make the poems interactive, therefore helping build a strong appeal to the reader. ...read more.

To make a strong appeal to the reader, 'To Autumn' also uses words and phrases with an onomatopoeic effect such as 'winnowing wind' and 'wailful choir'. This use of language helps creates the calm Autumn atmosphere and appeals to the readers' sense of sound. In conclusion both poems use a variety of techniques in order to appeal to the reader, techniques such as personification which works very well in 'To Autumn' like in the line; 'Thy hair soft-lifted' which says that Autumn has hair, when really it is the leaves of Autumn. And there is also the appealing interaction done with the dialogue of 'La Belle Dame Sans Merci'. Though overall we can see that nature and the use of it to reflect feelings has the most important presence in each poem. . ?? ?? ?? ?? ...read more.