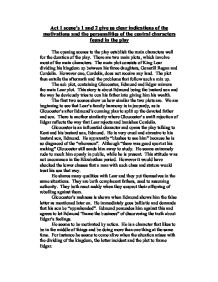 Act 1 scene's 1 and 2 give us clear indications of the motivations and the personalities of the central characters found in the play The opening scenes to the play establish the main characters well for the duration of the play. There are two main plots, which involve most of the main characters. The main plot consists of King Lear dividing his kingdom up between his three daughters, Gonerill Regan and Cordelia. However one, Cordelia, does not receive any land. The plot then entails the aftermath and the problems that follow such a mix up. The sub plot, containing Gloucester, Edmund and Edgar mirrors the main Lear plot. This story is about Edmund being the b*****d son and the way he deviously tries to con his father into giving him his wealth. The first two scenes show us how similar the two plots are. We are beginning to see that Lear's family harmony is in jeopardy, as is Gloucester's after Edmund's cunning plan to split up the devoted father and son. There is another similarity where Gloucester's swift rejection of Edgar reflects the way that Lear rejects and banishes Cordelia. Gloucester is an influential character and opens the play talking to Kent and his b*****d son, Edmund. He is very cruel and abrasive to his b*****d son, Edmund. He apparently "blushes to see him" because he is so disgraced of the "whoreson". Although "there was good sport at his making" Gloucester still sends him away to study. ...read more.

He is obviously motivated by people, including his family how good, powerful and superb he is. This is of course ludicrous as many of these compliments are not true, however they are given because he is the king. Lear uses an interesting metaphor to describe his rage and torment. When Kent tries to calm him down he says, "Come not between his dragon and his wrath". It is interesting as he describes himself as the dragon and his anger and fury as the wrath. This is a good metaphor and suits his animal like and rash behaviour. Lear is blind and irresponsible as a father and as a ruler. The fact that the king is thinking about giving up his crown would have alarmed and shocked the Jacobean audience. This is because there was such controversy over who would succeed Elizabeth I. He is a stubborn man and does not like to accept his responsibility in anything that goes wrong. He struggles to accept the blame for his elder daughter's cruel ways and will not fully acknowledge his foolishness in 1.1. We also discover that Lear is an angry man and has a very short temper. When Cordelia does not take part in his "love test" he starts to rant and rave. He swears by the "sun", the "night" and "hecate" (a goddess of the night), that he will disown her. This would have been very effective and offensive, in the time of the play. ...read more.

Cordelia is a more honest, trusting, and devoted character. She plays a major contrast to Goneril and Regan, who are neither honest nor trusting. By not taking part in the "love test" she establishes herself as a repository of virtue. It also makes it clear to us how authentic her love for her father really is. Once Goneril and Regan have lied and being deceitful to their father, Lear asks Cordelia how much she loves him. She simply replies "nothing" when he asks her what she has to say. This shows how brave and how she stands by her morals. She could have quite easily given in and followed her two sisters. However she held back and did the right thing. She is able to speak her love more honestly and truthfully than her sisters. Her strength and integrity are shown again when she scorns Burgundy and parts frostily from her sisters. Some may argue that Cordelia is awkward and stubborn. She could have easily made up comments to gain land and keep the peace within the family. Overall act one scene, one and two, provide us with an excellent opening to introduce us to the characters and show us their personalities. We also discover what motivates the characters and what are their main qualities. Shakespeare does this purposely so we get to know the characters, and see how they develop throughout the play. He uses different tactics and strategies to make us feel like we know the characters. He also uses the main plot of the play to create a sub plot within it. This makes us feel that something could happen at any moment. ...read more.