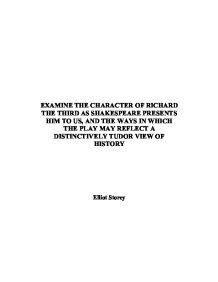 EXAMINE THE CHARACTER OF RICHARD THE THIRD AS SHAKESPEARE PRESENTS HIM TO US, AND THE WAYS IN WHICH THE PLAY MAY REFLECT A DISTINCTIVELY TUDOR VIEW OF HISTORY Elliot Storey Throughout the play 'Richard III', the various facets of the main character Richard emerge and are displayed to the reader in a number of ways. Fixated on his goal of becoming King, Richard's behaviour and remarks seem to centre on this obsession. This becomes evident to the reader from the opening soliloquy, in which Richard uses a well-used technique of his, pathos, to try and generate pity from the reader/audience. Richard uses this technique on a number of occasions, using his deformities as a way to gain the upper hand against his enemies. For example, in the very opening soliloquy, he uses his deformities as an excuse for his evil, 'And therefore, since I cannot prove a lover To entertain these well-spoken days, Then I am determined to prove a villain' 1 Richard again uses his deformities as ammunition in an argument against the Woodvilles, the royal family, whilst also exhibiting to the reader his acting skills, pretending with mock horror that he is disgusted at Elizabeth and the Woodvilles for implying that Richard hates her and her family, 'Because I cannot flatter and look fair, Smile in men's faces, smooth, deceive and cog... I must be held a rancorous enemy.' ...read more.

Infer the bastardy of Edward's children.' 14 Many people lay between Richard and the throne, and the reader soon finds out that Richard considers the easiest way to the throne is to simply kill whoever stands in his way. We see many times how Richard can ruthlessly kill in cold blood, purely to further his own ambitions. For example, very early on in the play, the reader is immediately introduced to the murderous Richard when he orders the death of his own brother, Duke of Clarence. Richard's deceitful side also is shown to the reader here, as he lies to Derby, Hastings and Buckingham, telling them that it is in fact the Queen and the Woodvilles that are turning the King against Clarence, 'I do beweep to many simple gulls, Namely to Derby, Hastings and Buckingham, That stir the King against the duke my brother' 15 Richard, ruthless and efficient, even instructs the killers in this scene how to kill his own brother, for Richard believes Clarence may be able to persuade the murderers not to kill him, '...Do not hear him plead, For Clarence is well spoken and perhaps May move your hearts to pity if you mark him.' 16 Another example of Richard's sheer murderous brutality is when he orders the death of the two young Princes. It is clear that Richard shows no remorse or fear for the deed that will be committed at his orders, 'Shall I be plain? ...read more.