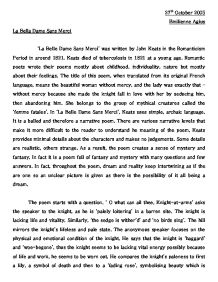 27th October 2005 Emilienne Agius La Bella Dame Sans Merci 'La Belle Dame Sans Merci' was written by John Keats in the Romanticism Period in around 1821. Keats died of tuberculosis in 1821 at a young age. Romantic poets wrote their poems mostly about childhood, individuality, nature but mostly about their feelings. The title of this poem, when translated from its original French language, means the beautiful woman without mercy, and the lady was exactly that - without mercy because she made the knight fall in love with her by seducing him, then abandoning him. She belongs to the group of mythical creatures called the 'femme fatales'. In 'La Belle Dame Sans Merci', Keats uses simple, archaic language. It is a balled and therefore a narrative poem. There are various narrative levels that make it more difficult to the reader to understand he meaning of the poem. Keats provides minimal details about the characters and makes no judgements. Some details are realistic, others strange. As a result, the poem creates a sense of mystery and fantasy. In fact it is a poem full of fantasy and mystery with many questions and few answers. In fact, throughout the poem, dream and reality keep intertwining as if the are one so an unclear picture is given as there is the possibility of it all being a dream. The poem starts with a question. ...read more.

She is a symbol of the supernatural, she is a beautiful, light and passionate creature yet full of indescribable and intriguing mystery. She is a symbol of love and passion and her perfection seems so close yet unreachable through all its mystery, something so beautiful and loving beyond the knight's imagination. She could also be an image of what the knight wants to dream. She is associated to nature and the supernatural, something mystical and unknown to the human scientific knowledge. This woman could be anything as she could also just be a creation of the knight's imagination, of what he wants to see, and this could possibly create confusion in the reader's mind. She is described by the title as a exquisite yet fatal woman without mercy. This lady's mysteriosity is as ambiguous as the poem itself. He talks about what they did together, the ' garlend' he made 'for her hair', and they way 'she look'd at me as if she did love'. He says that she told him that she loved him and took him to her 'elfin groth'. They were both filled with passion. There, he slept and in his sleep he had a dream. Keats also names the 'steed`, thus introducing a symbol of sexuality showing the physically attraction between the two. ...read more.

There is the application of phrasing and repetition which is a characteristic of ballads. The poet shows an emphasis on the use of musicality, like an incantation with a magical touch. This relaxing rhythm may also be a symbol of the supernatural. Keats uses an archaic kind-of language to give a better idea about the plot being set in a sort of Medieval fairy time in the past. The poet does not comment throughout the poem about what happens, and he does not interpret it, making it more perplex and ambiguous, and simultaneously interesting and captivating. The beauty of this poem lies in the mystery with which it attracts its reader. It is a very entrancing and appealing poem as its mystery give it a certain enhancing and yet mystical effect on me as a reader giving me a greater desire to explore the unknown view of this poem and it gives the opportunity to different views and explanations to what is going on which accumulates even more mystery within the poem. It may be seen as a gateway to the childhood in our hearts, a time when we thought that everything is possible. But after all, 'all that we have see or seen is but a dream in a dream' and so may all that we read in this poem be just a dream which may develop our sense of imagination and give us the opportunity to create a fantastical world of our own in our minds. _______________(1383 words)_________________ ...read more.