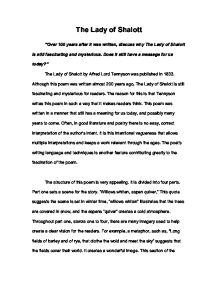 The Lady of Shalott "Over 100 years after it was written, discuss why The Lady of Shalott is still fascinating and mysterious. Does it still have a message for us today?" The Lady of Shalott by Alfred Lord Tennyson was published in 1833. Although this poem was written almost 200 years ago, The Lady of Shalott is still fascinating and mysterious for readers. The reason for this is that Tennyson writes this poem in such a way that it makes readers think. This poem was written in a manner that still has a meaning for us today, and possibly many years to come. Often, in good literature and poetry there is no easy, correct interpretation of the author's intent. It is this intentional vagueness that allows multiple interpretations and keeps a work relevant through the ages. The poet's writing language and techniques is another feature contributing greatly to the fascination of the poem. The structure of this poem is very appealing. It is divided into four parts. Part one sets a scene for the story. "Willows whiten, aspen quiver," This quote suggests the scene is set in winter time, "willows whiten" illustrates that the trees are covered in snow, and the aspens "quiver" creates a cold atmosphere. ...read more.

The poems ends with a tragic note which leaves the readers sad but wanting to know more. This makes the readers look back on the poem to analyze and discuss the poem. Even though The Lady of Shalott was written in the Victorian ages, the story was set in an earlier time, in the middle ages or the medieval period. Tennyson loosely based the poem on the Arthurian legend of Elaine of Astolat. Elaine of Astolat is about a young lady in the royal family who dies of unrequited love for Lancelot. This is similar to what happened to the Lady of Shalott. An idea I had is that "the curse" in the story is actually love. When she meets Lancelot she falls in love. However, just like Elaine of Astolat, her love was not returned and ends up dying of heartbreak. In other words, the curse, love, kills her. Another theme of this poem could be bravery. In the story, the Lady knew she could not look directly out the window or go out the tower. "She knows not what the curse may be", although she wasn't sure what the consequences of breaking the curse were, she knew that if she does breaks it, eventually she would have to pay for her actions. ...read more.

There are both positive and negative sides of each decision. "But in her web she still delights to weave the mirror's magic sights" this quote shows that the Lady enjoys weaving and creating her art. In spite of this, she, like most people, wants to be connected to the real world. Eventually, she makes her choice which was to abandon her art and join the world. The curse in this interpretation is the loss of her creative perception of the world. When she faces reality by looking out the window to Lancelot, "out flew the web and floated wide; the mirror crack'd from side to side". It breaks the mirror that she no longer has to see through and destroys her "web", her handiwork. Reality makes the art she has created vanish. This can relate to Tennyson's view. In conclusion, the artistic intentions of Tennyson and how he created the story in the poem was interesting to read and captures the reader's attention, keeping the readers entertained. Tennyson wrote the Lady of Shalott in a way that can relate to artists, women, teenagers and all kinds of people throughout the different time periods. This poem includes messages that still applies for us today and by analyzing this poem, we could learn a lot about the past and present. ...read more.

There begins to be some could analysis of language, structure and form in this essay; however at times the analysis is a bit superficial and the characters and narrative could be explored in more depth. Some good links are made between different parts of the poem and more of these should be focused on.