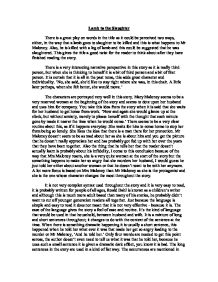 Lamb to the Slaughter

Lamb to the Slaughter There is a great play on words in the title as it could be perceived two ways, either, in the way that a lamb goes to slaughter to be killed and this is what happens to Mr Maloney. Also, he is killed with a leg of lamb and this could be suggested that he was slaughtered. This gives the title a good twist for the reader to think about after they have finished reading the story. There is a very interesting narrative perspective in this story as it is really third person, but when she is thinking to herself it is a bit of third person and a bit of first person. It is certain that it is all in the past tense, this adds great character and individuality. 'No, she said, she'd like to stay right where she was, in this chair. A little later perhaps, when she felt better, she would move.' ...read more.

It is not very complex syntax used throughout the story and it is very easy to read, it is probably written for people of all ages, Roald Dahl is known as a children's writer and although this is much more adult based than many of his stories, he probably didn't want to cut off younger generation readers all together. Just because the language is simple and easy to read it does not mean that it is not very effective - because it is. The ease of the language gives the story a feel of ease and routine. It's the kind of language that would be used in that household, between husband and wife. It is a mixture of long and short sentences throughout; it changes to do with the context of the sentence at the time. When there is something dramatic happening it is usually a short sentence, this happened when he told her what ever it was that made her get so angry leading to the murder or Mr Maloney, 'And he told her.' ...read more.

Mrs Maloney does something very strange at the end, once the leg of lamb has been eaten, she goes into the other room and giggles at what has happened showing that she doesn't seem to have any remorse as to what has happened and what she has done. This shows the great character change from the beginning of the story. It makes you think that has she always been like this, very devious. Or, has she just kept her husbands continuing acts of selfishness and his constant lack of interest in her locked up and him telling her this was the last straw and just made her snap. In conclusion, I believe that this is a very good story and very different from the writers usual style. It is very well written and very easy to read. The way that the two people's style of living has been taken into account and shown through the syntax, sentence structure and narrative is very good. It really grabs the readers attention and the conclusion of the story is definitely not the ending that is expected. ...read more.