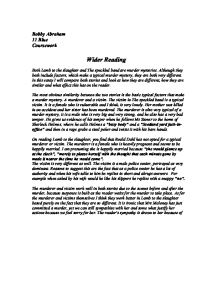 Lamb to the slaughter and The speckled band

Bobby Abraham 11 Blue Coursework Wider Reading Both Lamb to the slaughter and The speckled band are murder mysteries. Although they both include factors, which make a typical murder mystery, they are both very different. In this essay I will compare both stories and look at how they are different, how they are similar and what effect this has on the reader. The most obvious similarity between the two stories is the basic typical factors that make a murder mystery. A murderer and a victim. The victim in The speckled band is a typical victim. It is a female who is vulnerable and I think, is very lonely. Her mother was killed in an accident and her sister has been murdered. The murderer is also very typical of a murder mystery, it is a male who is very big and very strong, and he also has a very bad temper. He gives us evidence of his temper when he follows Ms Stoner to the home of Sherlock Holmes, where he calls Holmes a "busy body" and a "Scotland yard jack-in-office" and then in a rage grabs a steel poker and twists it with his bare hands. ...read more.

From reading The speckled band we witness acts of kindness and bravery on the part of Sherlock Holmes. This already gives the reader an image of a good kind man who just wants to help. Although Sherlock Holmes was the first fictional detective, he is still very typical of what you would expect a detective to be. He is male, logical, eager, brave and scientific. One example of these characteristics is shown when Dr Roylott warns Sherlock Holmes off the case. Instead of being intimidated he thinks logically and presumes Dr Roylott must have something to hide. However, O'Malley and Noonan of Lamb to the slaughter are very different to Sherlock Holmes. They give us no evidence that they are scientific, brave, deductive or even professional. They drink on the job, eat and have a chat whilst they are meant to be working. The setting for The speckled band is an old house, which is very typical of a murder mystery; it leaves endless opportunity for secret rooms, passages, ghosts and murders. The setting for Lamb to the slaughter is a family home, which is a very unlikely place for a murder to take place. ...read more.

The language used in The speckled band is very old and some of the words have taken on different meanings. It is written in long paragraphs, which are mostly the spoken words of the characters. The language in Lamb to the slaughter is not as old but is still different from modern language. The paragraphs are short but have long descriptive sentences. Overall The speckled band seemed more successful to me because although it was a very typical murder mystery it was written in such a way that you had to find out how Mrs Stoner died and who or what was responsible. The circumstances surrounding her death were very mysterious and the clues kept you guessing but until you had finished the book You could never be certain. You realise that it takes a detective like Holmes to figure sense of all the little clues. Lamb to the slaughter was very interesting to read but apart from the sympathy the reader felt for Mrs Maloney there wasn't much interaction between the readers and the character. In The speckled band, we are being told the story by Watson, which gives the effect of Watson actually talking to us. We are supporting Holmes and trying to make sense of all the clues before he does as if we are in a race with him. ...read more.