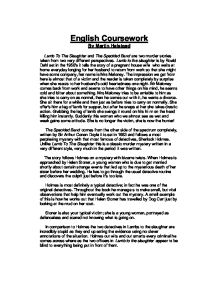 Lamb To The Slaughter and The Speckled Band

English Coursework By Martin Halstead Lamb To The Slaughter and The Speckled Band are two murder stories taken from two very different perspectives. Lamb to the slaughter is by Roald Dahl set in the 1950's it tells the story of a pregnant house wife who waits at home everyday longing for her husband to return from work so that she might have some company, her name is Mrs Maloney. The impression we get from here is almost that of a victim and the reader is taken completely by surprise when she reacts to her husband's cold heartedness one night. Mr Maloney comes back from work and seems to have other things on his mind, he seems cold and bitter about something. Mrs Maloney tries to be amiable to him as she tries to carry on as normal, then he comes out with it, he wants a divorce. She sit there for a while and then just as before tries to carry on normally. She offer's him a leg of lamb for supper, but after he snaps at her she takes drastic action. ...read more.

A small example of this is how he works out that Helen Stoner has travelled by Dog Cart just by looking at the mud on her coat. Stoner is also your typical victim; she is a young woman, portrayed as defenceless and scared not knowing what is going on. In comparison to Holmes the two detectives in Lambs to the slaughter are incredibly stupid as they end up eating the evidence using no clever annotations of the situation. Holmes out wits and out smarts every criminal he comes across where as the two officers in Lamb to the slaughter appear to be blind to everything being put in front of them. At the same time the victims and murders appear to completely switch rolls. In Lamb to the Slaughter the victim seems to be much more the sort of person you would expect to commit the crime, while the actual murderer still seems to be the victim. The Specked Band is very different in contrast, the victim is a young women almost helpless and powerless to do anything with out the help of Holmes. ...read more.

This attributes the good qualities of both books and helps the reader to keep their attention longer. The Speckled band had many a moment where you didn't know what was going to happen next and in places this made it very exciting. It is almost the blandness of the behaviour of Mrs Maloney that keeps the reader interested in Lamb to the slaughter, the way she makes an alibi by visiting the local shop and almost continuing everyday life making no one aware of what she has just done. The ending to Lamb of the slaughter was humorous and unexpected, with the detectives actually eating the evidence Mrs Maloney has been able to make up possibly the best cover up ever! The ending in the speckled band also had a twist, not of who the murderer was, but how he had performed the murder. Both were good endings and thoroughly enjoyable. In most respects Lamb to the Slaughter seems the most successful to me, it contains humour, grief and a great turn around of normal murder mysteries, and I really enjoyed it. The speckled band was also impressive and the end twist really added to it, but it didn't keep me as griped to it as Lamb to the Slaughter did. ...read more.