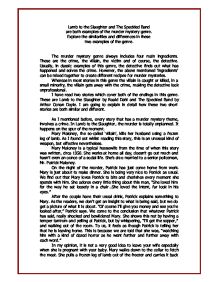 Lamb to the Slaughter and The Speckled Band are both examples of the murder mystery genre. Explore the similarities and differences in these two examples of the genre. The murder mystery genre always includes four main ingredients. These are the crime, the villain, the victim and of course, the detective. Usually, in classic examples of this genre, the detective finds out what has happened and solves the crime. However, the above mentioned 'ingredients' can be mixed together to create different recipes for murder mysteries. Whereas in most stories in this genre the villain is caught or killed, in a small minority, the villain gets away with the crime, making the detective look unprofessional. I have read two stories which cover both of the endings in this genre. These are Lamb to the Slaughter by Roald Dahl and The Speckled Band by Arthur Conan Doyle. I am going to explain in detail how these two short stories are both similar and different. As I mentioned before, every story that has a murder mystery theme, involves a crime. In Lamb to the Slaughter, the murder is totally unplanned. It happens on the spur of the moment. Mary Maloney, the so-called 'villain', kills her husband using a frozen leg of lamb. As I found out whilst reading this story, this is an unusual kind of weapon, but effective nevertheless. Mary Maloney is a typical housewife from the time of when this story was written, circa 1950. She works at home all day, doesn't go out much and hasn't even an ounce of a social life. She's also married to a senior policeman, Mr. Patrick Maloney. On the night of the murder, Patrick has just come home from work. Mary is just about to make dinner. She is being very nice to Patrick as usual. We find out that Mary loves Patrick to bits and cherishes every moment she spends with him. ...read more.

"I want some potatoes please, Sam. Yes, and I think a can of peas." She had already rehearsed these lines beforehand at home. What Mary is doing here, is creating an alibi. The villain in The Speckled Band is the complete opposite of Mary Maloney. Unlike in Lamb to the Slaughter, it isn't much of a shock to us when we find out that Dr. Roylott is the murderer. Dr. Roylott is described as being quite a "fierce" looking man. It is said that he is a "huge man." He sounds like a killer to us already. "A large face, seared with a thousand wrinkles...and marked with every evil passion." This line makes it even easier for us to picture Dr. Roylott as the killer. Dr. Roylott also has history of violence. Helen says that, "he beat his native butler to death, and narrowly escaped a capital sentence." Dr. Roylott is not just brawn, he also has a brain, as his title suggests. He is extremely clever. You have to clever in order to organize a crime like this one. The crime in The Speckled Band would require a man of genius to carry it out. It is in total contrast to the crime in Lamb to the Slaughter where Patrick is killed with a single blow to the head. Another reason why we come to accept Dr. Roylott as the murderer is because he is the girls' step-father, meaning he is not their biological father and may not have much love for them. In Lamb to the Slaughter though, Mary soaks Patrick in her love. We feel no sympathy for Dr. Roylott because he only wants to kill the two girls for their money. Helen explains, "Each daughter can claim an income of �250, in case of marriage...even one of them would cripple him to a serious extent." In Lamb to the Slaughter, Mary kills Patrick because of deeper reasons. ...read more.

Mr. Holmes knows himself that he is a very good detective. He is not at all modest and at some points even boastful. He knows that he is very clever and doesn't fray from showing it. He basically tells us that he had solved the crime before even setting foot in Roylott's room. "I had come to those conclusions before ever I had entered his room." We can see just how different the two detectives are in this story. They are complete opposites. One solves the crime, the other eats the main lead! The main difference between these two short stories is that one of them has the crime solved, and the other doesn't. Throughout reading both stories, you continually notice the traditional and not so traditional aspects of both. Both stories are completely opposite, so it is easy to spot their differences. Not one element in both stories is the same. The crime in one is serious; the crime in the other is almost a joke. The villain in one is a six months pregnant woman and the villain in the other is an intelligent, fierce doctor. The stories end in different ways, but both have satisfactory endings nonetheless. In Lamb to the Slaughter, Mary gets away with murder, which is what we want. In The Speckled Band, Dr. Roylott is killed, which is also what we want. The stories are both different in the way that they are told. In Lamb to the Slaughter, we know exactly what has happened, and the detective doesn't. In The Specked Band we are kept in suspense, because we know just as much as the detective. In my opinion, Lamb to the Slaughter was a more enjoyable story. It provides a welcome twist to the genre. It contains humour, which lightens the atmosphere. I think that more authors should follow in Roald Dahl's example and write murder mysteries that don't always follow the rules. It would be nice if every book made you smile as you closed it, just as this one did. ...read more.