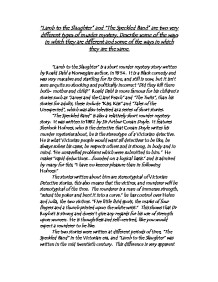 "Lamb to the Slaughter" and "The Speckled Band" are two very different types of murder mystery. Describe some of the ways in which they are different and some of the ways in which they are the same. "Lamb to the Slaughter" is a short murder mystery story written by Roald Dahl a Norwegian author, in 19 54. It is a Black comedy and was very macabre and startling for its time, and still is now, but it isn't seen as quite so shocking and politically incorrect "Did they kill them both- mother and child?" Roald Dahl is more famous for his children's stories such as "James and the Giant Peach" and "The Twits", than his stories for adults, these include "Kiss, Kiss" and "Tales of the Unexpected", which was also televised as a series of short stories. "The Speckled Band" is also a relatively short murder mystery story. It was written in 1892 by Sir Arthur Conan Doyle. It features Sherlock Holmes, who is the detective that Conan Doyle writes his murder mysteries about, he is the stereotype of a Victorian detective. He is what Victorian people would want all detectives to be like, he always solves his cases, he respects others and is strong, in body and in mind. "He unravelled problems which were submitted to him." He makes "rapid deductions...founded on a logical basis." and is admired by many for this, "I have no keener pleasure than in following Holmes." The stories written about him are stereotypical of Victorian Detective stories, this also means that the victims, and murderer will be stereotypical of the time. The murderer is a man of immense strength, "seized the poker and bent it into a curve." ...read more.

"The crash, the noise, the small table overturning." This example of short, staccato sentences empathises Mary's actions of the brutal murder, short stabbing motions, which are spur of the moment. Doyle relies on the way he uses vocabulary to create stress and tension to keep the reader hooked. "She writhed as one who is in terrible pain." The suspense in "Lamb to the Slaughter" keeps the reader enthralled by not telling them what Patrick tells Mary, we know that it is bad because of her reactions, "Her first instinct was not to believe any of it." Another example of suspense is when a detective goes to question Sam the grocer. "He was back with a page of notes...'peas...cheesecake...impossible that she...'" As the audience, although we sympathise with Mary. We begin to feel that perhaps she ought to suffer some consequences for the heinous crime she committed. Perhaps this is a hint from Dahl that in modern society, the criminal doesn't always get caught as they do in Sherlock Holmes' cases. There is less certainty that all is as it seems, everything has a twist to it. The two murderers are very different for many reasons, the first and most obvious being the fact that Dr Roylott is male and Mary Maloney is female. Dr Roylott is what the Victorian public would expect a murderer to be like, he is an aggressive, "'I am a dangerous man to fall foul of.'" Bitter, "'What has she been saying to you?'" cunning male, "such a one as would occur to a clever and ruthless man." And he has motives. "If both girls had married he would have had a mere pittance." ...read more.

This shows that in modern society, stereotypes can no longer be believed and adhered to. They are just what one reads about in a book or sees in a film. Dahl may be trying to say that in a world as uncertain as this nothing is a certainty and if a crime is committed the criminal is not always going to get caught. This relates to all ages and all types of crime, from smoking in the school toilets, to murdering an innocent child. This ending is much more realistic and relative to the world and society of today. It is for the ending that I prefer "Lamb to the Slaughter" I find it a more interesting story and also this is the type of humour I find funniest. I like being left on a cliff-hanger because it leaves you thinking more about the story. The ending of "The Speckled Band" is less eventful it is just a description of how Holmes managed to solve the case, it is a very mundane ending and doesn't add anything to the story. Together these stories show how society has changed, In the times of "The Speckled Band" a family secret was hidden and guarded with dire consequences if let out into the world, "many times I had to pay to keep his rampages out of the headlines." "Lamb to the Slaughter" shows that if you had a secret you told whomever it was of concern to, Patrick told his wife, Mary his secret, although perhaps he shouldn't have, if he hadn't he would be alive. Maybe this is a hint telling us that we were better off in the Victorian society when you wouldn't tell your wife a secret and that way she wouldn't have a reason to kill. By Laura Barnes ...read more.