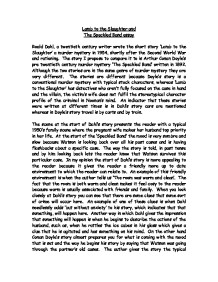 Lamb to the Slaughter and The Speckled Band essay

Lamb to the Slaughter and The Speckled Band essay Roald Dahl, a twentieth century writer wrote the short story 'Lamb to the Slaughter' a murder mystery in 1954, shortly after the Second World War and rationing. The story I propose to compare it to is Arthur Conan Doyle's pre twentieth century murder mystery 'The Speckled Band' written in 1892. Although the two stories are in the same genre of murder mystery they are very different. The stories are different because Doyle's story is a conventional murder mystery with typical stock characters, whereas 'Lamb to the Slaughter' has detectives who aren't fully focused on the case in hand and the villain, the victim's wife does not fulfil the stereotypical character profile of the criminal in Noonan's mind. An indicator that these stories were written at different times is in Dahl's story cars are mentioned whereas in Doyle's story travel is by carts and by train. The scene at the start of Dahl's story presents the reader with a typical 1950's family scene where the pregnant wife makes her husband top priority in her life. At the start of the 'Speckled Band' the mood is very sombre and slow because Watson is looking back over all his past cases and is having flashbacks about a specific case. The way the story is told, in past tense and by him looking back lets the reader know that Watson survives this particular case. In my opinion the start of Dahl's story is more appealing to the reader because it gives the reader a friendly more up to date environment to which the reader can relate to. ...read more.

In the story it says that the client travelled by train, which shows that she was in a rush because she could have taken the slow way, by cart, but she obviously felt that she could be the next victim. The structure of the 'The Speckled Band' is that Watson's memories come first thereby setting the mood. The narrator who tells the story comes next, followed by the clues and evidence and finally the outcome or conclusion. In contrast to this Dahl's story starts with the building up of the fake atmosphere, then you get the motive and the murder which is finally followed up by the arrival of the detectives who are colleagues of the victim. 'Lamb to the Slaughter' is not the classic 'whodunit' murder mystery because the detectives don't take as much care suspects whereas Holmes, from the moment he heard the story, had a main suspect. 'The Speckled Band' is a much longer story than 'Lamb to the Slaughter' and neither story gives the audience chance to solve the mystery. Doyle creates tension by describing the weather and surroundings as dull and miserable, which leads the reader to think of a nasty place. He also describes Roylott's attitude, physicality and behaviour in enough detail to make him add to the tension. The stories differ because of the times they were written so the audience for Doyle would only have been interested in the investigation whereas Dahl's audience would rather focus on the crime that has occurred. ...read more.

Doyle's story is by far the most intriguing title. The main differences between the two stories are that the villains have different fates, one gets away with the murder, but even if she had been caught she would have been let off lightly as it was a crime of passion so the court would be lenient on her sentence, where as the other murderer ends up being killed by the same thing he used to kill his daughter. Also one villain did not actually commit the murder with his own hands whereas Mary Maloney killed her husband by hitting him over the head with a frozen joint of meat. Murder stories have changed from Victorian times because of the changing attitudes to women's places in society and also because of the more lax way of looking at crime. Also criminals aren't always being found out and some authors write their stories in a light-hearted way. I think that to a younger child Dahl's story would be more appealing because it has the element of comedy in it and also that it is based in a time where modern people can almost relate to it but personally I find Doyle's story more appealing. I found it more appealing to collect the clues and evidence in my head and try and solve the mystery than to just read a funny murder mystery story. I found Doyle's story more compelling because the title does not give anything away to start off with and the whole story is a complete mystery and nothing is obvious. ...read more.