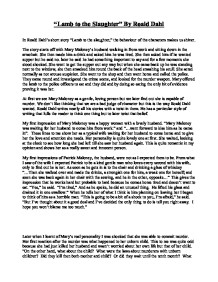 Lamb to the Slaughter&quot; By Roald Dahl

"Lamb to the Slaughter" By Roald Dahl In Roald Dahl's short story "Lamb to the slaughter," the behaviour of the characters makes us shiver. The story starts off with Mary Maloney's husband walking in from work and sitting down in the armchair. She then made him a drink and asked him he was tired. She then asked him if he wanted supper but he said no. later he said he had something important to say and for a few moments she stood shocked. She went to get the supper out any way but when she came back up he was standing next to the window, she then smacked him round the back of the head smashing his scull. She acted normally as not arouse suspicion. She went to the shop and then went home and called the police. They came round and investigated the crime scene, and looked for the murder weapon. Mary offered the lamb to the police officers to eat and they did and by doing so eating the only bit of evidence proving it was her. ...read more.

This gives the impression that he works hard but probable to hard because he comes home tired and doesn't want to eat. "Yes," he said. "I'm tired," And as he spoke, he did an unusual thing. He lifted his glass and drained it in one swallow." When he tells her of what I think is him planning on leaving her I began to think of him as a horrible man. "This is going to be a bit of a shock to you, I'm afraid," he said. "But I've thought about it a good deal and I've decided the only thing to do is tell you right away. I hope you won't blame me too much." Later when I learnt of Mary's real personality I was shocked that she was able to commit murder. Her first reaction after the murder was what happened to her unborn child. This to me was quite odd because she had just killed her husband and wasn't worried about her own life but that of her child. ...read more.

"But I've thought about it a good deal and I've decided the only thing to do is tell you right away. I hope you won't blame me too much." He is not as cruel as I I first though but that's a theme all the way through the story, not being like we first thought. After I read the story I felt hat the title was quite appropriate because the way she killed him was rather cruel. She comes up behind him with him having no idea she has the large piece of lamb in her hands and hits him and ultimately kills him. He was like a lamb, weak and innocent. Well he wasn't innocent as such but he could have sorted that out after he had the discussion. In Conclusion, the behavior of Mary Maloney made me shiver because I had misjudged her right from the beginning and did not realise what she was capable of. I think Roald Dahl has written this story in a magnificent way. He captures the reader and wants them to carry on to the very end. He is no doubt one of the best writers of all time. By Tim Marshall ...read more.