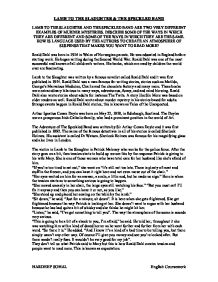 LAMB TO THE SLAUGHTER &amp; THE SPECKLED BAND

LAMB TO THE SLAUGHTER & THE SPECKLED BAND LAMB TO THE SLAUGHTER AND THE SPECKLED BAND ARE TWO VERY DIFFERENT EXAMPLES OF MURDER MYSTERIES. DESCRIBE SOME OF THE WAYS IN WHICH THEY ARE DIFFERENT AND SOME OF THE WAYS IN WHICH THEY ARE THE SAME. HOW IS LANGUAGE USED BY THE AUTHORS TO CREATE AN ATMOSPHERE OF SUSPENSE THAT MAKES YOU WANT TO READ MORE? Roald Dahl was born in 1916 in Wales of Norwegian parents. He was educated in England before starting work. He began writing during the Second World War. Roald Dahl was one of the most successful and known of all children's writers. His books, which are read by children the world over are fascinating. Lamb to the Slaughter was written by a famous novelist called Roald Dahl and it was first published in 1954. Roald Dahl was a man famous for writing stories, stories such as Matilda, George's Marvelous Medicine, Charlie and the chocolate factory and many more. These books were extraordinary hilarious in many ways, adventurous, funny, sad and mind blowing. Roald Dahl also wrote stories about adults for instance The Twits. A story like Six More was based on older readers as well. Roald Dahl wrote about murder mystery in his stories based for adults. Strange events happen in Roald Dahl stories; this is known as Tales of the Unexpected. Arthur Ignatius Conan Doyle was born on May 22, 1859, in Edinburgh, Scotland. The Doyles were a prosperous Irish-Catholic family, who had a prominent position in the world of Art. The Adventure of The Speckled Band was written by Sir Arthur Conan Doyle and it was first published in 1892. ...read more.

My imagination of how the living room is set is that the lights are dim and the room is small and the sofa's are an old design, everything is cramped together. After the murder the room goes quiet and within seconds all you can hear is the violence of the crash. Mary has created an atmosphere of horror, an atmosphere that you don't want to be around her, because she might be capable of doing another murder. I do feel sympathy for the victim wanting to leave her because she has no excitement in her life; she just waits for her husband to come home from work. The setting of the old house in The Speckled Band is a Victorian style atmosphere. To describe the house, "The building was of grey, lichen blotched stone, with a high central portion and two curving wings, like the claws of a crab, thrown on each side. In one of these wings the windows were broken and blocked with wooden boards, while the roof was partly caved in, a picture of ruin. The central portion was in little better repair, but the right hand block was comparatively modern, and the blinds in the windows, with the blue smoke curling up from the chimneys, showed that this was where the family resided." Here describes the house and this proves that it was a modern house. The way is described by Sherlock Holmes. Other details in this story that add to the atmosphere of evil and horror are the inside of the house. The way everything is spaced out and so big, also the idea of having Indian animals for instance a snake, a cheetah and a baboon. ...read more.

In The Speckled Band they use the famous detectives Sherlock Holmes that makes the case look professional and in Lamb to the Slaughter there are two detectives, a photographer, a fingerprint man and policemen. It is highly unusual to see a female detective in a murder mystery; it builds the tension a bit down. It won't keep the story up and going. HOW IS LANGUAGE USED BY THE AUTHORS TO CREATE AN ATMOSPHERE OF SUSPENSE THAT MAKES YOU WANT TO READ MORE? Suspense is created by how the clues in both stories link up to the murder, no reader will have a thought in their head that the Speckled Band was the murder. The use of using a frozen lamb is premium. People would want to find out more in Lamb to the Slaughter, questions going in their head for instance; does she get caught with the murder? What happened to the evidence? In the Speckled Band, questions like, Why does Helen's stepfather keep Indian animals? Both stories have a state of excitement or anxiety caused by having to wait for something. The story which I liked best was Lamb to the Slaughter, because how the murder was set. A murderer will unlikely use a frozen leg of lamb to kill someone and the way she makes the policemen eat the evidence. People will always like to read murder mysteries because they make you want to read more. Reading murder mysteries is great because you can always try and solve it yourself. Overall I will say that murder mysteries are the superlative genre that I like to read. ?? ?? ?? ?? HARDEEP SOHAL English Coursework ...read more.