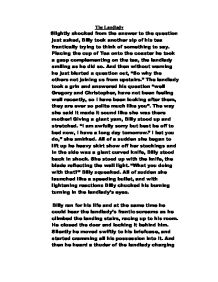 The Landlady Slightly shocked from the answer to the question just asked, Billy took another sip of his tea frantically trying to think of something to say. Placing the cup of Tea onto the coaster he took a gasp complementing on the tea, the landlady smiling as he did so. And then without warning he just blurted a question out, "So why the others not joining us from upstairs." The landlady took a grin and answered his question "well Gregory and Christopher, have not been feeling well recently, so I have been looking after them, they are ever so polite much like you". The way she said it made it sound like she was there mother! Giving a giant yarn, Billy stood up and stretched. "I am awfully sorry but best be off to bed now, I have a long day tomorrow." I bet you do," she smirked. All of a sudden she began to lift up he heavy skirt show off her stockings and in the side was a giant curved knife, Billy stood back in shock. ...read more.

Then he remembered what the landlady had said about Gregory and Christopher who was upstairs because they weren't feeling very well, if she had tried to knife him, Imagine what she has done to them! With his decision made Billy started to climb the gloomy stairs. Dust was on the railing he wiped it off as he went up. When he got to the top he found himself gazing at two rooms, he decided to take the one closeted on the right. Billy edge open the door a dirt musty smell Hit is face it smelled like vinegar. He walked in and looked around the room in confusion Billy wasn't expecting what he was going to find in here. The room was exactly like his except of the horrendous smell, and as he look at the bed he noticed it was occupied! "Hello" Billy shouted, it was as silent as it were when he comes in shot to the bed and slowly lifted the covers 2 dead bodies were laid there. It made Billy nearly be sick in his mouth, they defiantly not feeling well he thought! No sain human being could have done this, he thought to himself. ...read more.

Billy was on his way to bath of all places for the last meeting before his official retirement suddenly the train stopped and the announcer announced that they where at bath. Billy got off the train and like he had done 50 years ago made his way down the path that had led him to such a cruel place. He walked down the empty street many of the houses were bordered up and rusting away, allot had changed in 50 years Billy thought to himself. Then he got to the place of the terrible B&B and has Billy looked up the building had been rebuilt exactly has it had fallen he walked across the road to get a better look at it. Then a young man was walking down street a lot like he had done all them years ago he look at the sign and knocked on the door. The door swivelled open straight away, and with a horror Billy's past there stood the un aged unchanged, Landlady! Shivers crawled up Billy's legs as she greeted the young man. It was like a Ghost from Billy's past that won't go away, the young man walked in and as he passed in Billy saw the landlady licking her lips, and slamming the door! ...read more.