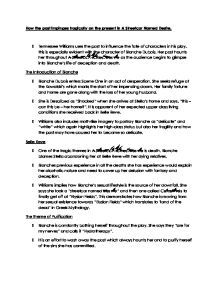 How the past impinges tragically on the present in A Streetcar Named Desire. ? Tennessee Williams uses the past to influence the fate of characters in his play, this is especially evident with the character of Blanche Dubois. Her past haunts her throughout A Streetcar Named Desire as the audience begins to glimpse into Blanche's life of deception and death. The Introduction of Blanche ? Blanche Dubois enters Scene One in an act of desperation. She seeks refuge at the Kowalski's which marks the start of her impending doom. Her family fortune and home are gone along with the loss of her young husband. ? She is Described as "Shocked" when she arrives at Stella's home and says, "this - can this be - her home?". ...read more.

She says she took a "streetcar named Desire" and then one called Cemetries to finally get off at "Elysian Fields". This demonstrates how Blanche is moving from her s****l existence towards "Elysian Fields" which translates to 'land of the dead' in Greek Mythology. The theme of Purification ? Blanche is constantly bathing herself throughout the play. She says they "are for my nerves" and calls it "Hydrotherapy". ? It is an effort to wash away the past which always haunts her and to purify herself of the sins she has committed. ? But the audience sees how Blanche can never cleanse away the past. Her fantastical personality and deception are exposed to Stanley which ultimately leads to her doom. ...read more.

and Blanche responds with, "It brought me here" is relating to the actual Streetcar and Blanches past. When they mention "desire" they are also implying the desire which attracts to people in a relationship. Stella is asking whether Blanche has ever experienced "desire" which she admits to bringing her to New Orleans. This discloses some of Blanche's history and could suggest her impending and tragic fate. * Blanche also reveals her intense dislike of Stanley. She uses animalistic imagery including "ape-like", "sub-human" and "b*****l" which introduces the theme of conflict and opposing backgrounds. Her primitive view of Stanley is further emphasized when she almost begs for Stella to escape with her. "Don't hang back with the brutes" illustrates how Blanche wants to persuade Stella to remember her life in Belle Reve and move away with her instead of keeping her "common" lifestyle. ...read more.