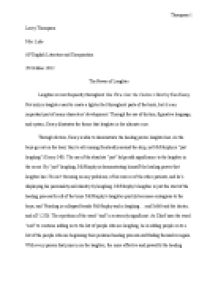 Laughter occurs frequently throughout One Flew Over the Cuckoos Nest by Ken Kesey.

﻿Thompson Lacey Thompson Mrs. Lyke AP English Literature and Composition 29 October 2012 The Power of Laughter Laughter occurs frequently throughout One Flew Over the Cuckoo?s Nest by Ken Kesey. Not only is laughter used to create a lighter feel throughout parts of the book, but it is an important part of many characters? development. Through the use of diction, figurative language, and syntax, Kesey illustrates the theme that laughter is the ultimate cure. Through diction, Kesey is able to demonstrate the healing power laughter has. As the boys go out on the boat, they?re all running frantically around the ship, yet McMurphy is ?just laughing? (Kesey 248). The use of the absolute ?just? helps add significance to the laughter in the scene. By ?just? laughing, McMurphy is demonstrating himself the healing power that laughter has. He isn?t focusing on any problems, of his own or of the other patients, and he?s displaying his personality and identity by laughing. ...read more.

The use of figurative language is another technique used to present the theme that laughter is the ultimate cure. As McMurphy laughs, it?s so genuine that he ?spread[s] his laugh out across the water? (250). While his laugh doesn?t actually spread out across the water, it?s so hearty and full that it can?t help but consume the atmosphere. By spreading his laugh out, McMurphy also distributes it out to each of the boys on the boat. His laughter quickly leads to theirs, which becomes their ultimate healing tool. The overwhelming spread of laughter takes over all the boys, and they ?swing a laughter that rang out on the water in ever-widening circles?in wave after wave after wave? (250). The powerful spread of their laughter indicates the growth of their individuality. Just as the laughter spreads across the ocean, the regaining of identity spreads across the entire ship, curing all of the boys from their entrapment an inability to be themselves. As Chief laughs, he feels as if he is ?off the boat, blown up off the water?high above myself? (250). ...read more.

McMurphy?s laugh is so significant in the healing process for every single boy, and by allowing the concept of McMurphy?s laughter stand alone, it brings more emphasis onto how important of a role his laughter plays in the ultimate curing of the boys. Syntax is also used to describe how McMurphy views his life and how ?he won?t let the pain blot out the humor no more?n he?ll let the humor blot out the pain? (250). The use of the chiasmus makes it evident that even though McMurphy is suffering just as the other boys are, he won?t let it ruin who he is and what he enjoys in life. The realization by Chief that McMurphy?s laughter is his way of keeping his identity helps Chief and the other boys use laughter to find their own identities, which leads to them being cured of their loss of individuality. By presenting laughter frequently throughout the novel, Kesey demonstrates the idea that laughter is important to one?s identity. By using various literary techniques such as diction, figurative language, and syntax, the theme that laughter is the ultimate cure becomes widely applicable to the novel. ...read more.