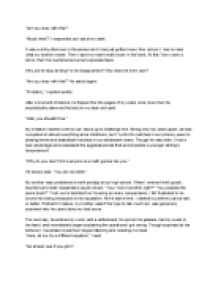 Learning a Lesson. My irritation reached a fervor as I stood up to challenge him. Being only two years apart, we had competed at almost everything since childhood,

Transfer-Encoding: chunked ﻿?Are you okay with this?? ?About what?? I responded as I sat at my desk. It was a chilly afternoon in December and I had just gotten home from school. I had no idea what my brother meant. Then I saw my recent math exam in his hand. At first Tomo wore a smile, then his countenance turned expressionless. Why did he stop smiling? Is he disappointed? Why does he even care? ?Are you okay with this?? He asked again. ?Probably,? I replied quietly. After a moment of silence, he flipped thru the pages of my exam once more then he emphatically slammed the test on my desk and said: ?Well, you shouldn't be.? My irritation reached a fervor as I stood up to challenge him. ...read more.

Reticent in nature, my brother wasn?t the type to talk much so I was genuinely surprised why he cared about my test score. The next day, he entered my room with a whiteboard. He put on his glasses, had my exam in his hand, and immediately began explaining the questions I got wrong. Though surprised at his behavior, I surprised myself as I began listening and nodding my head. ?Here, let me try a different equation,? I said. ?Go ahead, see if you got it? And so we spent the next hour problem solving. This incident left a strong impression on me. Before, I had always viewed my brother as a rival. ...read more.

Rarely could I recall Tomo ever seeking retribution however. He remained stoic and kept to himself. Because of this I think I became somewhat envious of his abilities, viewing them as innate. As I spent more time observing him, I saw how much practice he put into his activities, be it studying for an exam or mastering the saxophone. Although being compared to him was stressful throughout my childhood, what I learned most from him is that excellence is a choice and a conscious decision. This has given me a clarity to my actions and led me to achieve not only better academic scores but also has helped me become a leader on campus for my Science Club and basketball team. Though I?m still very competitive, my motivations today arise primarily from an internal source and I?ve learned to be my truest self when it comes to facing challenges. ...read more.