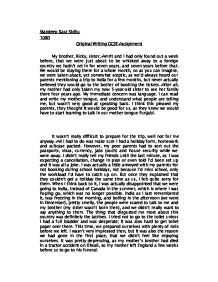 Mandeep Kaur Sidhu 10BD Original Writing GCSE Assignment My brother, Ricky, sister, Amrit and I had only found out a week before, that we were just about to be whisked away to a foreign country we hadn't set in for seven years, and seven years before that. We would be staying there for a whole month, so as you can imagine, we were taken aback, yet somewhat sceptic, as we'd always heard our parents mentioning a trip to India for a few months, but never actually believed they would go to the bother of booking the tickets. After all, my mother had only taken my now 5-year-old sister to see her family there four years ago. My immediate concern was language. I can read and write my mother tongue, and understand what people are telling me, but wasn't very good at speaking back. I think this pleased my parents, they thought it would be good for us, as they knew we would have to start learning to talk in our mother tongue Punjabi. It wasn't really difficult to prepare for the trip, well not for me anyway. All I had to do was make sure I had a holiday form, homework and suitcase packed. However, my poor parents had to sort out the passports, visas, currency, jabs (ouch) and house security while we were away. I didn't really tell my friends until the last minute, as I was expecting a cancellation, change in plan or even told I'd been set up and it was all a joke. I was actually a little annoyed with my parents for not booking during school holidays, not because I'd miss school, only the workload I'd have to catch up on. But once they explained that they couldn't get a holiday the same time as us, I felt quite sorry for them. When I think back to it, I was actually disappointed that we were going to India, instead of Canada in the summer, which is where I was hoping go, which was no longer possible. ...read more.

This village I could not forget. Last time Ricky and I had great fun chasing after the chickens, feeding the cows the chapattis we refused to eat, running around with our uncles and aunts. They're actually our age, but it's one of the funny age differences that happen a lot in our family tree. At this village lived my great granddad, which gave me something to talk about at home. The only way I can think of to describe Mussayala is that it is one of those ancient forgotten old places in the middle of nowhere. The village had a single toilet, which was sometimes pretty embarrassing. As I thought about how many times we had watched the home video we made from last time, I grew more exited. But when we arrived, in the evening, my "cousins" acted as if they couldn't figure out who we were. Okay, so maybe my Punjabi wasn't great, but they were so shy. I hoped that this would not carry on. Because my parents had arranged to see an architect about the building on the plot of land for my grandmother. The only architects we knew of were in Chandigardh, the capital of Punjab. I didn't really have any expectations of the city at first, but was very impressed. We got there on the bus, which isn't the best way of travelling in India. We were out in the town, and got to travel in the rickshaws. The roads were a lot cleaner than those in the villages. It was practically like England. We went an actual fast food restaurant, but it didn't sell meat so we just ordered chips and pizza. I wasn't anticipating there would be so many young college students, who wore the same sort of trousers and top I did. I immediately regretted my decision to wear a traditional suit that day. This was the one time I would have felt comfortable in my normal English clothes, and I'd just wasted that chance. ...read more.

There were tears as we left the village. I felt sick at the bottom of my stomach when we waved goodbye. I'd got a little gift for each of my cousins, and made my uncle promise he'd make sure they got them. " See you in four months" I said to him, as we dragged our entire luggage to the x-rays. I knew there wasn't much chance of my parents letting me come back in the summer holidays, even though I told them I was willing to go alone. Apparently, it was so hot, that I wouldn't be able to survive, and would get ill quickly. When Kuldeep asked me when I was coming back, I jokingly told her on her wedding day, though she is only seventeen, but I was surprised when she made keep it as a promise to her. I had picked up many skills throughout the holiday. These include: milking a cow, driving a tractor, making ghee, and insulting somebody in Punjabi, many of which are pretty useless to me in Britain, but it was the experience of learning theses things from my relatives that I treasure. When the plane landed in Britain, I don't think I've ever felt so down. I still want to turn around and go straight back. The weather suited my mood perfectly, it was pouring down. My friends at school and family said there were three things that had changed about me. My skin colour was darker, or as my friend Shona said, "glowing". (This sounded much nicer.) I had also lost a bit of weight, which I have unfortunately regained. I think the change that most people especially my relatives noticed was, that I spoke much nicer Punjabi, and my words flowed better. I think this is because, in England, I could get away with thinking in English, translating the words into the other language, and then letting them out. Whereas in India, you must think sharply and reply quickly, so I had to train my mind to think, as well as speak in Punjabi, which is why it has improved so much. ...read more.