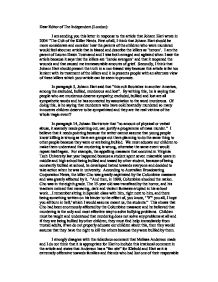 Letter to the editor

Dear Editor of The Independent (London): I am sending you this letter in response to the article that Johann Hari wrote in 2004 "The Cult of the Killer Nerds. First of all, I think that Johann Hari should be more considerate and consider how the parents of the children who were murdered would feel about an article that is biased and describe the killers as 'heroes'. I am the parent of Lauren Dawn Townsend and I was both enraged and agitated when I saw the article because it says that the killers are 'heroic avengers' and that it reopened the wounds and that caused me immeasurable amounts of grief. Secondly, I think that Johann Hari should present the truth in a non-biased way because this article is far too lenient with its treatment of the killers and it is presents people with an alternate view of these killers which your article can be seem to promote. In paragraph 3, Johann Hari said that "this cult flourishes in another America, among the excluded, bullied, murderous and lost". ...read more.

with him, right next to him, and there being something written on his binder to the effect of, you know, ' "F"' you all, I hope you all burn in h**l,' which I would assume meant us, the students." This shows that Cho had been enormously affected by the Columbine massacre and he believed that murdering is the only and most effective way to solve bullying problems. Children must be taught and understood that murdering does not solve any problems at all and if they are being bullied by other children, they must find help immediately from trusted adults, if we do not properly educate our children about this, then they would assume that they have the right to kill the others because they were bullied by them. I strongly disagree with the ridiculous comment that Melissa Anderson made and I do not think that it is appropriate for Hari to include this irrational comment in the article and states that Anderson has a "fan site" for Klebold and Hari as it is extremely offensive towards families and friends who had lost one of their respectable members in this atrocious event. ...read more.

By doing this, the writer seems to feel sympathy towards the boys and he may mislead younger readers and influence them to think that the killers deserve sympathy because Hari has not sufficiently and explicitly condemned the boys' actions and the viewpoints of the fan groups. I cannot agree more with the comment that jocks are thought as more superior in American high schools and people who are different are 'freaks' and are at the bottom. I think that this incident is mostly the schools and some parents' faults as they promote and encourage this perception into children's minds when they are young. Even though I agree with Hari's point here, I still think that Klebold and Harris were wrong and had no rights to kill anyone. To conclude, I think that your journalist Hari should be more considerate when he writes sensitive articles in the future as it can easily offend and upset readers. I also hope that parents would educate their children well enough to make them understand that murdering is wrong and it cannot solve any problems at all. Dawn Anna Townsend, mother of Lauren Dawn Townsend, Columbine victim ...read more.

This is an excellent letter which conveys an upset and angry tone through the use of language, punctuation and devices.
The writer has used complex sentences expertly and has paragraphed well.
The writer needs to think about varying the sentence starters. This piece could also be improved by linking together the beginning and ending. It is important to re read work to avoid 'silly mistakes'.
****