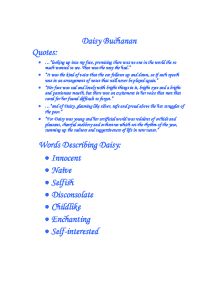 Daisy Buchanan Quotes: * ..."looking up into my face, promising there was no one in the world she so much wanted to see. That was the way she had." * "It was the kind of voice that the ear follows up and down, as if each speech was in an arrangement of notes that will never be played again." * "Her face was sad and lovely with bright things in it, bright eyes and a bright and passionate mouth, but there was an excitement in her voice that men that cared for her found difficult to forget." * ..."and of Daisy, gleaming like silver, safe and proud above the hot struggles of the poor." * "For Daisy was young and her artificial world was redolent of orchids and pleasant, cheerful snobbery and orchestras which set the rhythm of the year, summing up the sadness and suggestiveness of life in new tunes." Words Describing Daisy: * Innocent * Na�ve * Selfish * Disconsolate * Childlike * Enchanting * Self-interested Tom Buchanan Quotes: * "Now he was a sturdy straw-haired man of thirty with rather hard mouth and a supercilious manner." * Two shining eyes had established dominance over his face and gave him the appearance of always leaning aggressively forward." * "Not even the effeminate swank of his riding clothes could hide the enormous power of that body-he seem to fill those glistening boots until he strained the top lacing..." * "Making a short deft movement, Tom Buchanan broke her noise with his open hand." ...read more.

One summer he lists all the people who attend Gatsby party. Response Two: I found it was interesting that Gatsby has such a story about his background. He even provides a medal, and several other tings as proof, almost as it had been rehearsed. Response Three: During this chapter you see a really shady side of Gatsby. When he gets pulls over, he is able to show a card and get out of a ticket. Also, he friend Wolfshiem was the one who fixed the World Series in 1919. It is definitely apparent that Gatsby has things going on he wouldn't want other people to know about. (I.e.-daisy) Response Four: There are so many sides to Gatsby in this chapter. One part of him is shady and he has a lot of corrupt stuff going on, while the other side is this sweet, love sick man, still deeply in love with this woman. Response Five: The symbol of the green light is brought up in this chapter. You see not only does it represent Daisy and Gatsby desire to have her once again, but it is also symbolic of Gatsby pursuit of wealth(money is green) and his goal becoming a better man. Chapter Five Response One: It is interesting to see the extent Gatsby will go to in order to attain his desire. He even goes as far as offering Nick a job to make Nick some money, which Nick seems to be offended by. Response Two: I thought it was really clever how Gatsby knocked over the clock. ...read more.

This town is across the bay from West Egg. This is the side where all the socially graced, wealthy people live. The shores glitter from reflections of the mansions. West Egg-This is where Nick and Gatsby live. It is said to be the "less fashionable of the two". Nick lived on the very tip of West Egg Towards the bay. Buchanan's House-Their house is in East egg. Gatsby can see their light from their house across the bay. It has French windows, brick walkways; luxurious carpets the color of red wine. Gatsby House-It is the "factual imitation of Hotel de Ville in Normandy". I call it a mansion on forty acres! It has a marble swimming pool and the gardens and lawns are splendid. The inside has libraries and ballrooms, great for parties. Valley of Ashes-It is a grey land in which dust and ashes constantly drift over it. It is about half way between West Egg and New York, where the motor road runs along side the railroad. Wilson's Garage/House-The interior of the place is bare and dull. It contained only one wrecked Ford truck, covered in dust. Upstairs there was a cozy, romantic apartment. Tom and Myrtle's apartment-The apartment is in the city. It has a dining room, a small bedroom, and bath. There are lots of oversized furniture in the living room and one picture of a hen, which from a far looks like a stout old lady in a hat. Nick Bungalow- Nick's house is right next store to Gatsby's in West Egg. It is rather shabby compared to his cousin's or Gatsby's. It is squeezed between two houses that cost millions, while his rent is eighty dollars per a month. ...read more.