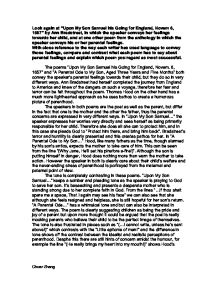 Look again at "Upon My Son Samuel his Going for England, Novem 6, 1657" by Ann Bradstreet, in which the speaker conveys her feelings towards her child, and at one other poem from the anthology in which the speaker conveys his or her parental feelings. With close reference to the way each writer has used language to convey those feelings, compare and contrast what each poem has to say about parental feelings and explain which poem you regard as most successful. The poems "Upon My Son Samuel his Going for England, Novem. 6, 1657" and "A Parental Ode to My Son, Aged Three Years and Five Months" both convey the speaker's parental feelings towards their child, but they do so in very different ways. Ann Bradstreet had herself completed the journey from England to America and knew of the dangers on such a voyage, therefore her fear and terror can be felt throughout the poem. Thomas Hood on the other hand has a much more lighthearted approach as he uses bathos to create a humorous picture of parenthood. ...read more.

The tone is also frustrated in places such as "(...I cannot write, unless he's sent above!)" which contrasts with the "Little epitome of man!" and the difference in tone shows off the contrast between the idealist and realistic perceptions of parenthood. Despite this there are still hints of concern amidst the humour, for example the line "(He really brings my heart into my mouth!)" shows Hood's worry for his son's safety and parallels with the panicked tone of "Upon My Son Samuel...". The language in "Upon My Son Samuel..." is mostly plain and everyday for the time of the poet as it's a prayer from her to God and was not written for other people to read. Therefore it's very genuine and shows the poet's true innermost feelings. However in lines such as "Thou mighty God of sea and land," which addresses God directly, the language is formal and grandiose to show her respect to God. The language is also heavily punctuated which slows the pace and gives each part of the line more importance, showing how much this prayer means to her. ...read more.

"Upon My Son Samuel..." can be internal or dramatic as the poet is not necessarily speaking the prayer out loud. However no matter which type of monologue it is it's still a true reflection of the poet's thoughts due to the fact it was not intended for anyone but God to hear. "A Parental Ode..." is in the form of and ode and was originally written to praise the son. Even so the poet cannot help but add in the bracketed lines to put across the real life scenes of having a child and we can see that the lines within brackets are the ones which truly reflect his thoughts at the time. Overall the two poems both agree that worry and anxiety are the main things a parent feels towards their child. However "A Parental Ode...", being written by a father in the Victorian times, seems more detached from being involved in looking after his child and the bathos makes it very flippant. In "Upon My Son Samuel..." the genuine nature and pathos created help us experience a much stronger connection emotionally between the poet and her son. Therefore I feel "Upon My Son Samuel..." is much more successful in conveying the true feelings of being a parent. ?? ?? ?? ?? Chuer Zhang ...read more.