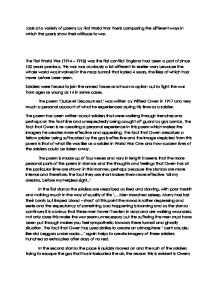 Look at a variety of poems by First World War Poets comparing the different ways in which the poets show their attitude to war. The First World War (1914 - 1918) was the first conflict England had been a part of since 100 years previous. This war was obviously a lot different to earlier wars because the whole world was involved in the mass turmoil that lasted 4 years, the likes of which had never before been seen. Soldiers were forced to join the armed forces and had no option but to fight the war from ages as young as 14 in some cases. The poem 'Dulce et Decorum est.' was written by Wilfred Owen in 1917 and very much a personal account of what he experienced during his time as a soldier. The poem has been written about soldiers that were walking through trenches and perhaps on the front line and unexpectedly being caught off guard by gas bombs. The fact that Owen is re- creating a personal experience in this poem which makes the imagery he creates more effective and appealing. The fact that Owen describes a fellow soldier being suffocated by the gas is effective and the image depicted from this poem is that of what life was like as a soldier in World War One and how sudden lives of the soldiers could be taken away. ...read more.

intense and very surreal, the use of similes such as ' these who die as cattle' referring to young soldiers being slaughtered like cattle and the personification used to should alliteration ' rifles' rapid rattle' exaggerate the scenes of violence we imagine when we think of the war. And the form of the poem differs because it is a lot shorter and much denser; the words are less casual and a lot stronger. The form of the poem is written in a similar way to a sonnet, with fourteen lines. This gives the audience a sense of a story that the poet is trying to tell us something important. This is more of a realization for the audience as to how bad life actually is fighting the war, and how difficult it is to forget events that have happened. In the first stanza Owen says that the 'wailing shells' sounds like a choir and are playing in their honour in their own country back home. He says that although the soldiers are moaning and the shells are wailing, there is no sympathy for the mourners back home, as if the lives of these soldiers were taken almost purposely. ...read more.

death I would write stories or poems about my experiences to make my readers aware of exactly what the soldiers went through in order to defend the country, instead of all the nonsense included in textbooks that miss out the most vital part of the war experience, real life versions of what happened. In my opinion I think the way in which both poets conveyed their thoughts and feelings about the war has made it a frightful topic, the fact they used such descriptive words and made it sound cruel is something I don't want to think about, but I think it is shameful what those young boys went through especially when they weren't given an option and even though they fought for our country they were malnourished, miserable and in pain for the whole time they were on the battlefront. This is the true unmasking of war and how it affected the lives of people involved. I feel privileged to have read these poems and shall forever hold the men who fought for my freedom all those years ago in high regard and the war poets that held nothing back and wrote detailed accounts of what life was really like in my opinion should be as renound and celebrated as other prolific writers such as Shakespeare. ...read more.