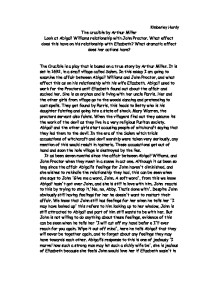 Kimberley Hardy The crucible by Arthur Miller Look at Abigail Williams relationship with John Proctor. What effect does this have on his relationship with Elizabeth? What dramatic effect does her actions have? The Crucible is a play that is based on a true story by Arthur Miller. It is set in 1692, in a small village called Salem. In this essay I am going to examine the affair between Abigail Williams and John Proctor, and what effect this as on his relationship with his wife Elizabeth. Abigail used to work for the Proctors until Elizabeth found out about the affair and sacked her. She is an orphan and is living with her uncle Parris. Her and the other girls from village go to the woods dancing and pretending to cast spells. They get found by Parris, this leads to Betty who is his daughter fainting and going into a state of shock. Mary Warren, the proctors servant also faints. When the villagers find out they assume its the work of the devil as they live in a very religious Puritan society. Abigail and the other girls start accusing people of witchcraft saying that they led them to the devil. In the era of the Salem witch trials accusations of witchcraft and devil worship were taken very seriously, any mention of this would result in hysteria. These accusations get out of hand and soon the hole village is destroyed by the lies. It as been seven months since the affair between Abigail Williams, and John Proctor when they meet in a scene in act one. ...read more.

John gets angry towards Elizabeth this can be seen when he says 'I know I cannot keep it. I say I will think on it!' he gets angry towards her because he doesn't like being told what to do, and she is trying to control his actions. He tells Elizabeth he cannot tell the court because he has no proof as he and Abigail were alone. This stirs up real tension and anger and we can now see that there is no trust in the relationship as seen when Elizabeth says 'You were alone with her', 'Why, then is it not as you told me' she doesn't trust him because he keeps lying, and she thinks there may still be something going on between him and Abigail. From this John just gets angry with her 'I'll not have your suspicion any more' he is defensive like he still has feelings for Abigail. Elizabeth then accuses him of still having feelings for Abigail, 'If it were not Abigail that you must go to hurt, would you falter now? I think not' she is saying if it was anybody else he was going to tell the court the truth about he wouldn't hesitate to do so, because of Abigail Elizabeth is suspicious of her husbands actions. This makes John even more angry for questioning him, he has got old fashioned views, he believes a wife shouldn't challenge her husband. At the end of this act we see Abigail get her revenge. ...read more.

This scene is set in a prison cell, Elizabeth is sent to John to try to make him confess to witchcraft. At first John tells Elizabeth that he might confess evidence of this can be seen when he says to her 'I have been thinking I would confess to them, Elizabeth' here we see John willing to destroy his name in order to stay alive and be with his wife. Then we see Elizabeth and John make the biggest sacrifice of all, for each other. John is willing to destroy his name, and lie to the court to save himself. Elizabeth is willing to allow John to be hung to save his name, because she knows how much it means to him. In the end John desides that he doesn't want to be seen as a fraud and a liar, he will not confess to the court, this action leads to John being hung. In this scene the Proctors reconcile, they both recognise what they've done wrong, this can be seen when Elizabeth says 'no honest love could come to me! Suspicion kissed you whenever you did,' here Elizabeth is blaming herself for whats happened, she thinks that she should have loved and trusted John more. Abigails affair with John strained his marriage with Elizabeth, and she made it difficult for them. The effect Abigail's actions have on the Proctors are, she brings them together again and makes them realise how much they mean to each other, despite Johns death. When the truth finally arises, that there was nothing going on in woods Abigail destroys herself and is forced to flee the village, with money stolen from Parris. ?? ?? ?? ?? ...read more.