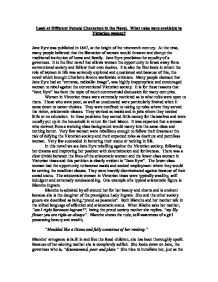 Look at Different Female Characters in the Novel. What roles were available to Victorian women?

Look at Different Female Characters in the Novel. What roles were available to Victorian women? Jane Eyre was published in 1847, at the height of the nineteenth century. At the time, many people believed that the liberation of women would threaten and disrupt the traditional institution of home and family. Jane Eyre proclaims the equality of a governess. It is the first novel that allows women the opportunity to break away from conventional society and follow their own desires. It is also the first book in which the role of women in life was seriously explored and questioned and because of this, the novel which brought Charlotte Bronte worldwide criticism. Many people claimed that Jane Eyre had an "extreme, radicalist image", was highly inappropriate and encouraged women to rebel against the conventional Victorian society. It is for these reasons that "Jane Eyre" has been the topic of much controversial discussion for many centuries. Women in Victorian times were extremely restricted as to what roles were open to them. Those who were poor, as well as uneducated were particularly limited when it came down to career choices. They were confined to taking up roles where they served the richer, aristocratic classes. They worked as maids and in jobs where they needed little or no education. In these positions they earned little money for themselves and were usually put up in the household in return for their labour. It was expected that a woman who derived from a working class background would marry into the same class and nothing better. ...read more.

"You are less than a servant because you do not work for your keep." She is resentful and rancorous where her pessimistic situation is concerned and by making Jane feel the extent of her dependence on Mrs Reed, she is trying to make Jane feel the same. She, unlike Jane, does not have the passionate incentive to improve her situation and achieve equality for herself. She is either of a weaker nature or has a generally submissive character that does not provide her with the strength she needs to rebel for what she believes in. Whatever the reason she is clearly the kind of person never to rebel against the despairing Victorian society. Jane Eyre is of a slightly better ranking than Bessie but only because unlike Bessie, she is educated. Nevertheless she is still a poor orphan and like her, has limited opportunities. From the very beginning of the novel, at Gateshead, Jane is excluded by the Reeds because of her social status. The Reeds have unchristian attitudes and take full opportunity of using their social hierarchy over Jane to their advantage. They exclude her from all family life and make it evident that they resent her living with them. They frequently resort to calling her derogatory names such as,"bad animal" and "mad cat". In the very first chapter we here Jane describing the extent of Mrs Reeds hatred towards her, "She boxed both my ears and left without a word." The Reeds are fully aware of Jane's status and treat her accordingly, as an undeserved orphan. ...read more.

Her new found money not only gives her wealth but social recognition and the liberty she has always strove to achieve. She goes back to Thornfield with the desire to marry Mr Rochester as an equal. She has always loved him but her fear of societies condemning influence made her apprehensive to marry him as a dependent. When she goes back to him she has independence and freedom and no longer has to worry about the critical Victorian society. When asked why she returned, she has one simple but key answer, "I stand here infront of you as an equal." Throughout the novel we see Jane battling against the Victorian society and their conventional expectations. She battled fiercely against the Reeds in an attempt to achieve recognition for her as a human being and not as an orphan. However, it is not till the very end that we see her achieve this goal. Had she had the money she has at the end, at the very beginning, I am certain that she would not have had to endure the discrimination she did. She would have been treated as a person with feelings and not superficially, as a penniless dependent. This novel indicates the extent to which the Victorian society were prejudice towards the poor and uneducated. Their criticising nature of the Victorian society did not allow them to treat people for the character they were but only for the change in their pockets. Jane succeeding to achieve her independence was not only a governess becoming a "lady", but a cry for equality everywhere. ...read more.